A Look into the debate last night 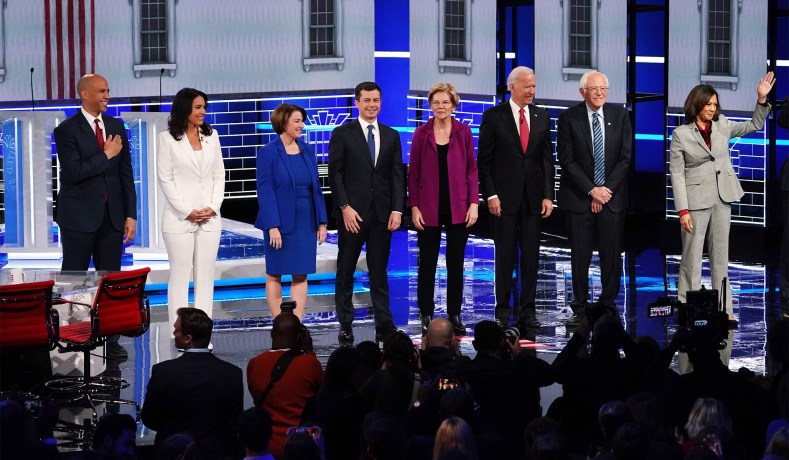 This photo is courtesy of the National Review

It would not be far-fetched for anyone to claim that politics is important. After all, the decisions that politicians make can at times literally be life-or-death for many people. So why, then does the American media continue to view politics as a spectacle, and rob it of the gravity it requires? Well, it may be because framing it that way makes it more palatable to the public; whether it’s the impeachment hearings or presidential debates, America just can’t seem to avoid turning our politics into a spectacle.

On November 13th, 2019 a tweet came out from NBC News linking to an article titled: “Plenty of substance but little drama on first day of impeachment hearings”. Below the headline, an analysis read: “The first two witnesses called Wednesday testified to Trump’s scheme, but lacked the pizazz necessary to capture public attention”. They weren’t the only ones–Reuters wrote: “Consequential, but dull: Trump impeachment hearings begin without a bang”. These hearings mark only the 4th time in the United States’ 243-year history that a president will face impeachment. The stakes involve his alleged attempt to condition congressionally approved military aid to a foreign nation on that nation investigating a political rival. In a time where the news media has a responsibility to provide the clarity and gravitas required when covering a topic as serious as this, they seem to have shirked that responsibility in favor of TV-executive buzzwords.

It’s not just with the impeachment hearings, either. This kind of coverage is nowhere more prevalent than in presidential elections. Yesterday, MSNBC and the Washington Post hosted the 5th Democratic Presidential Debate. These televised debates serve a purpose as a place where the candidates let people know where they stand on the issues, but the debates also spotlight the personalities of the candidates, and how they interact with each other. The presidential debates often encourage conflict between the candidates, and shouting matches are not uncommon. While last night’s debate featured only a few moments of conflict between candidates, (Namely, Sen. Kamala Harris’ ongoing feud with Rep. Tulsi Gabbard) the presentation of these debates makes one thing clear: America treats its politics like a game show.

Whomever is elected president on November 3rd, 2020 will be responsible for the well being of the approximately 360 million people who live in the United States, and will also have a profound impact on the lives of people around the world. It’s a position with unparalleled weight, and yet the New York Times publishes a list of winners and losers; they rank the candidates’ performances on a scale of 1-10.

Why must it be this way? Well, it doesn’t have to be. Yet it is because Americans don’t seem to care about politics otherwise. One of the main reasons why political participation has increased since Donald Trump took office is because the political has become the mainstream. The president tweets daily, there’s always a new scandal or controversy. In short, politics is now interesting to the average person.

The media has a responsibility to take things seriously, but they likely don’t because this is the only way to get people to pay attention. I don’t have an answer to this problem. I don’t know how to make America treat politics like it’s life-and-death. But if this is the way journalists can get people to pay attention at all, is a little drama really that bad of a thing?