Can the Planets Predict the Outcome of the 2020 Election? 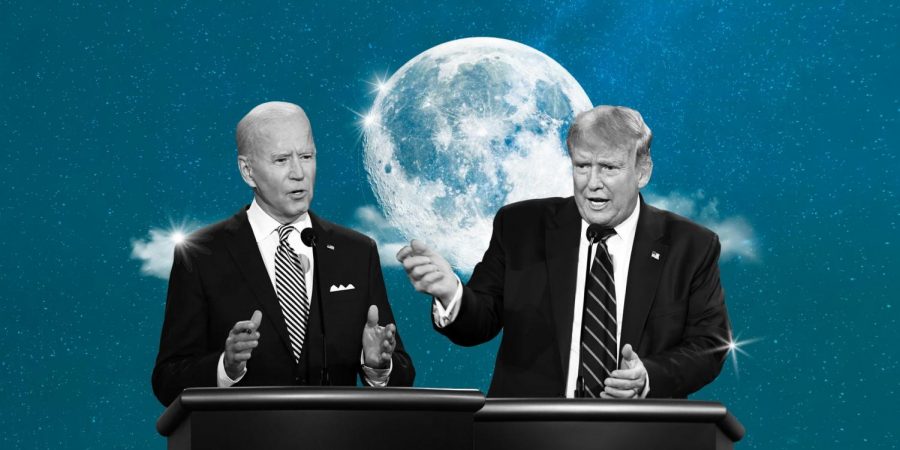 This photo is courtesy of orpahmag.com

There has been a lot of uncertainty surrounding this year’s chaotic presidential election. The two-party system has created a mass divide in America, specifically with these two 2020 presidential candidates. Each of who have astrological birth charts that would be going through a massive change come November 3, 2020. The changes occurring within their chart are transits, which would give some clarity as to what is to come for these two candidates in their future as well as America’s.

A transit is when a planet is moving through one of your natal placements, which would have an effect on one’s emotions, decision making, future, and role in life. For Democratic candidate Joe Biden, his natal chart will be experiencing a transit on election day which has been building up since early to mid-2020 when he was elected the official Democratic nominee. This Capricorn transit in Biden’s natal Jupiter will signify him stepping into new responsibilities and roles. Since this has been building up throughout his whole presidential campaign, this transit happening on election day would be the peak of this responsibility hitting him.

A recent transit that occurred for Biden that would greatly impact his career, is the Uranus transit in his Taurus moon that was opposite his four Scorpio placements, making it a Scorpio stellium. Luckily, Uranus is the planet of liberation and breakthrough. This transit’s effects would occur in a build up as well in which Biden’s political stances could possibly be swayed to believe and endorse more leftist viewpoints. This Uranus transit would push Biden to feel liberated and support these viewpoints because he has made the decision to do so, not because he knows that is what the people want.

Another notable change happening in Biden’s natal chart is the South Node of the moon crossing his first house from 2020 to 2021. A node in astrology is one’s fate and purpose and is in relation to the position of the moon the day one is born. Everybody has two nodes, a north and south one, which are opposite each other in the zodiac wheel and have different meanings as well. A North Node determines the life path one is growing into, whereas a South Node determines what one brings to this life and where one starts from. When a South or North Node of the moon crosses a house, it is known as an eclipse. The houses in astrology refer to the 12 zodiac signs that represent a different aspect of life, in relation to travel, dreams, career, self-love, awareness of self, relationships, money, and aspirations. This South Node eclipse in the first house indicates a self awakening for Joe Biden. It can lead to a diminished ego, which would coincide with the expansion of Uranus’s liberation. This transit is particularly important because in several previous presidential elections this eclipse in the first house has typically coincided with a winning candidate.

Looking back at the 2016 election, President Donald Trump had this South Node of the moon eclipse in his first house. This eclipse, of course, does not explicitly mean a win for said candidate with this transit, however, there has been a history of it and it’s good to take note of. Additionally, this eclipse in the first house also signals that one will be in the spotlight of an important role in their life.

The transits occurring in current President and Republican nominee Donald Trump’s natal chart are more dramatic and sudden as compared to Biden’s slow, progressing transits. Trump’s transits are going to greatly affect his identity moving forward, as well as his physical and mental health. He has a Capricorn pile up opposing his Saturn and Venus in his 12th house. The 12th house is known as the house of suffering. Lastly, he has the South Node on his natal South Node and moon which means the South Node will be in the same position it was when he was born. The result of this is that he will be experiencing an unstable, bodily period. The moon represents the body, so this transit can result in sudden and dramatic changes in his health.

These changes passing through each candidate’s natal charts are going to have a major influence on the future of America, regardless of who wins the election. The transits and eclipses can give some clarity to this tumultuous election, thankfully, coming to a close.