As of Saturday, November 7, 2020, Joe Biden was declared the 46th President of the United States. He has been awarded  the majority of votes cast by Americans by being very personable and caring; in comparison to his runner up, he has a much more mature way of addressing questions, issues, and promises. These traits are all comforting for Americans to see in their next president because it gives them a sense of protection.

Additionally, these traits are not just seen in his career, but throughout his life as a father, husband, brother, grandfather and leader. This is linked to his birth chart, or natal chart. A natal chart is essentially a snapshot of the sky the day one was born down to the exact location and minute. These charts consist of 14 placements that are all categorized by the planets and the constellations. To begin there is the sun sign, which is arguably the most well known placement on the natal chart, then there is the ascendant sign, otherwise known as the rising sign, and a moon sign. These three are often called one’s “big three”. For Biden, his big three are his sun in Scorpio, his rising in Sagittarius, and his moon in Taurus. The big three encapsulates the pillars of one’s true personality versus what is shown or seen by others, ego,  and lastly their emotions and inner feelings and thoughts. The sun sign determines ego and identity, which for Biden’s Scorpio sun, means he is a determined person with intense passion for the truth and authenticity. These qualities have been seen throughout Biden’s career because he has not backed down running for president.

The rising sign in one’s chart is described as one’s “mask”, or what is outwardly shown to people around them. This is usually what people see first about you. His rising is in Sagittarius meaning he is very independent, optimistic and confident. Again, these are all seen throughout the presidential debates and his campaigns by the way he presents himself and his speeches. This rising placement is also a mutable quality. This means that he can easily converse with people with maturity and respect and be able to receive and give out knowledge easily. Each sign is a part of one of the four elements and one of the three qualities. Sagittarius falls under a mutable fire sign, which would mean Biden is an assertive yet kind communicator. Alongside his fixed water sign sun, this makes a great combination of trusting his gut and leading with solid facts rather than hypotheticals and uncertainty.

Lastly, his moon sign is in Taurus, which is a fixed earth sign. The moon placement is related to one’s emotions and reflects what one truly feels and thinks on the inside when they are alone.  Earth moons in general are rational people whose emotions are acted upon concrete reasoning. They love stability and have a deep sense of loyalty with people they surround themselves with. With his moon in Taurus, this creates for a level headed president who leads with compassion. He will ride for the people who voted for him as well as the people who didn’t because he wants to create a secure, safe environment for everyone in the country.

These three placements are very important to acknowledge because it gives insight as to who Joe Biden is in the office and out, and more importantly, who America voted for. As for the rest of his chart, he has multiple Scorpio placements, giving him a stellium in a fixed water sign. This stellium and it’s energy will be present throughout his chart and other placements. It may even overshadow some of his other placements. This fixed energy that is dominant within his chart means he possesses a lot of determination and drive as well as stubbornness and often narrow mindedness. This may come off as negative, but these qualities are incredibly well to have in the position that he is in right now because many states are still heavily ruled by Republican values. This will keep Biden’s determination to help bring the country back to a place worth living in, essentially.

Another fixed placement that he has that will help his presidential run to be progressive, for the betterment of the country, is his Pluto in Leo. Pluto is the planet of liberation and rebirth and having a fixed fire sign, like Leo, in this placement will ensure prideful, courageous decision making. When making decisions or advocating for change, big or small, Pluto is the planet that will help enact those forthright feelings. The significance of Pluto in a chart is that it is ruled by a generation. For example, all current Marymount students have a Pluto in Sagittarius. This signifies a generation that ignites change and advocates for a better world, as well taking pride in individuality. Pluto in Sagittarius rules people’s charts beginning in 1995 to 2008, which paired with a president whose Pluto is in Leo, makes for an easy receptive line of communication between the president and an upcoming generation. Biden’s Leo Pluto will encourage him to be open and optimistic to change that the people demand.

Joe Biden’s natal chart can explain many things about the way he leads, cares, loves, and feels, which can give American’s a sense of hope and security as to what the next four years can encompass. When looking back at the last four years, Biden’s qualities in his natal chart can also help American’s exhale a long overdue deep breath they have been holding in. 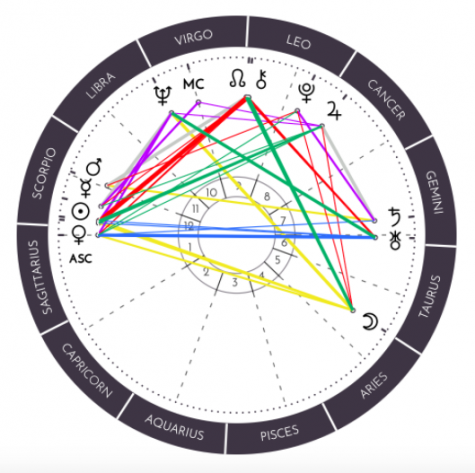