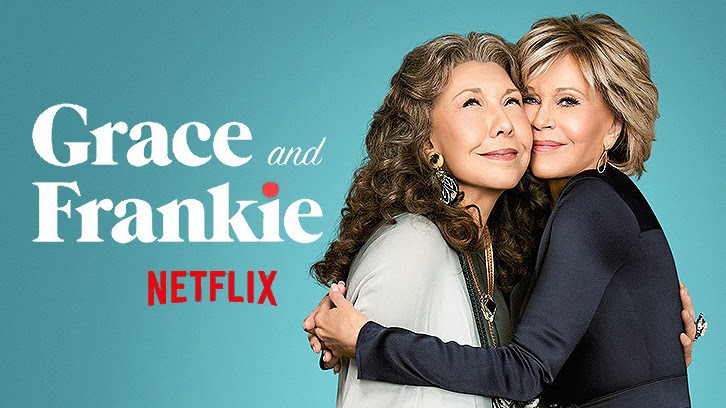 Right from the start, Grace and Frankie is a show that gets straight to the point. A wedding cake crumble in the opening credits as a cover of Stuck in the Middle with You plays. The pilot episode of the entire series is titled ‘‘The End’’. Within the first fifteen minutes, the viewer already knows Grace (Jane Fonda) and Frankie’s (Lily Tomlin) law partner husbands are leaving the two women for each other. They’re at a fancy restaurant and table manners dissolve as Grace throws seafood at her husband, Robert (Martin Sheen), and Frankie pulls out her inhaler as her husband, Sol (Sam Waterson), tries to calm her down. The camera pans out as Grace and Frankie both lose any thread of normalcy in their lives. This catastrophe is also the first seeds of the two women’s close friendship. This scene reflects a moment the characters will look back on, pinpointing the second when everything changes, for better or worse. Re-watching the series in 2020, there’s a comfort in a tv show like Grace and Frankie. Who doesn’t want an unlikely best friend when everything is toppling around you?

Grace and Frankie first aired in 2015. The show was one of a handful of Netflix Original Shows that proved to the industry that streaming platforms could create groundbreaking, engaging content. There aren’t many current examples of tv shows that dive into female friendship, sexuality, and aging. It’s a refreshing breath of air compared to the teen dramas that usually clog my recommendations on Netflix. As of 2020, Grace and Frankie has ran for six seasons, and production for the seventh, and final, season is halted because of Covid 19. It’s morbidly fitting that a show about change came to a halt because of an unforeseen pandemic.

That’s why, for me at least, Grace and Frankie is perfect for 2020’s chaos. Neither Grace nor Frankie ever denies that the stresses of life are always in full swing. But it’s their friendship and humor that pulls them through the roughest patches. The show never goes too far into the messiness of reality and there’s a resolution to be found at the end of each episode or season. Grace and Frankie also never stay upset with each other, the show is an advocate for the triumphs of friendship… If that seems sentimental in the political climate of 2020 (there’s a lot that can’t be solved by a stroll on the beach outside your second home) I’ve chosen to put on my rose-colored glasses. Or at least, I’ve decided I can wear my rose-colored glasses when I’m watching a thirty-minute episode about Grace and Frankie’s well-intentioned antics. Maybe every show isn’t supposed to splash cold water on our faces and force us a dose of reality. Occasionally, it’s nice to get lost in a sitcom about two best friends who make the best out of their obstacles. When the credits start rolling, the pessimistic world outside will still be there.