Will We Ever Find a Common Ground? 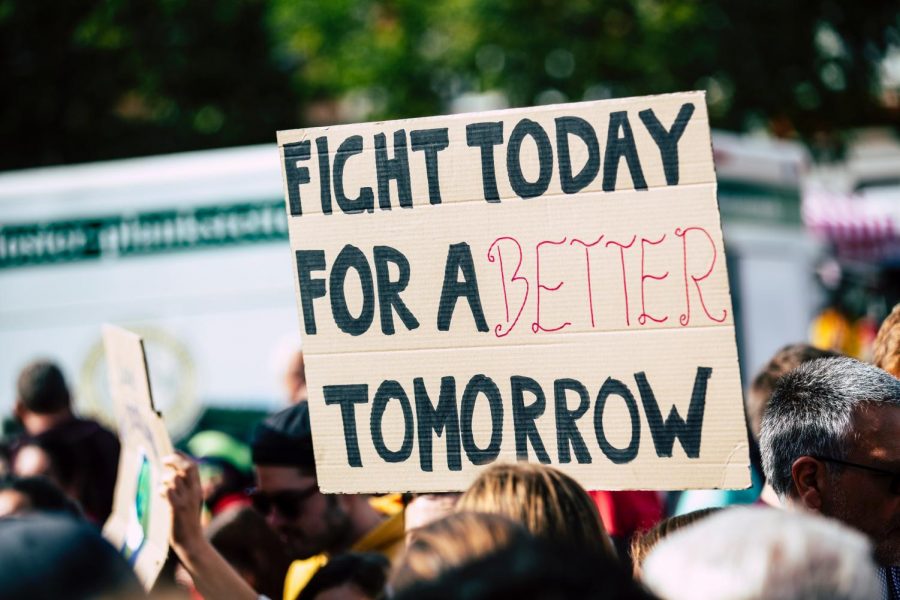 In an age where neighbors are taking down each other’s campaign signs, family members getting involved in Facebook brawls, and where people are relieved Covid has allowed them to avoid family events, we have entered a period of time of seemingly more division. The 2020 Presidential Election has led to many people letting their political anger triumph over their friendships, relationships, and family matters.

According to a Pew Research Center survey, 65% of voters say they are fearful about the state of the country and 57% of voters say they are angry about the state of the country. This fear and anger have translated into our everyday lives reaching the point where it is hard to imagine Americans reaching a common ground. Will we ever find a common ground after enduring these past four years?

Although most people may still remain amicable to people with differing views in person, the stark political division and anger are clear on social media. On Twitter, President Donald Trump continues to tweet that there was widespread voter fraud in the election and that the election was rigged. On the flip side, President-Elect Joe Biden has started his transition, nominating people to his cabinet and seemingly moving on from the drama surrounding the rigged election conspiracies. However, not everyone in America has moved on from the claims President Trump has made; the rigid dichotomy between Democrats and Republicans is becoming clearer.

In the aftermath of the election, posts have emerged where people have decided to take matters into their own hands, blocking their followers who voted for the opposing candidate. People are tip-toeing around each other on social media, hoping not to be blocked or searching for people to block from their followers list.

Mark Cutolo, a Staff Clinical Social Worker at MMC’s Counseling and Wellness Center, explained that “If people are feeling angry about the aftermath of this election cycle, it’s important to remember that anger, like all feelings, is temporary.” Cutolo pointed out that in every election there are winners and losers, and during every election cycle we can expect one side to be disappointed or angry. It is up to those who are consumed by their anger to either remain angry or redirect their anger and energy into something that is more positive and fulfilling.

Blocking friends and family members on social media out of anger and differences in politics is a personal decision and it is a right, however, Cutolo advises that it is also important to question how this person makes you feel in your personal life, if they bring you happiness or joy despite politics. “While we get to curate our social media, at the end of the day we don’t get to curate our communities – our country and communities are filled with people who hold a range of convictions, and somehow we have to figure out a way to live together,” Cutolo says. It is difficult to ease the tension from this election with those we disagree with, but it is important to weigh these differences and question if it would be possible to find a common ground.

Many agree that disagreeing on pizza toppings and clothing choices are not comparable or alike to disagreeing on political manners. According to a Pew Research Center survey, 45% of the nation’s adults have stopped talking to someone about politics or the election as a result of something they said. Only 54% of American adults have said that they have not cut off a political conversation with someone as a result of something they said. This shows that nearly half of Americans have decided to curate their conversations with others to not include discussion on politics. Thus, contributing to the polarization and divide we see on social media and in our communities and environments. 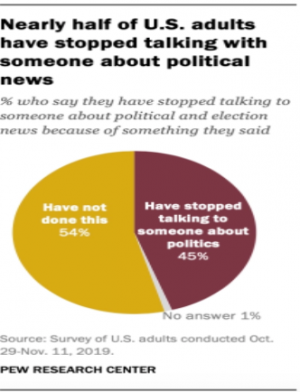 “At the end of the day, it’s also fine to acknowledge that we might not find common ground with someone of a different perspective, and it’s okay to ‘agree to disagree,’” Cutolo advises. Conducting conversations with someone who has opposing political ideas is difficult, and if it does not make you happen then it may not be worth it to have these hard conversations, especially if they result in more anger.

Samantha Nelson, a Communication Studies major at Marymount Manhattan College, thinks we can find a common ground, but that it will require everyone to understand that we all have different situations and circumstances, and most importantly to recognize that we are all human.  “When people understand and respect that we all have different life experiences, but we are all human and we all deserve the right to live comfortably and safely, we can all move past this election and move forward together as Americans,” Nelson says.

“To be ignorant to certain issues and to not really care about certain issues, as you know, Trump has shown, is to live in ignorance that everything is great about America, and that’s not the truth,” Nelson explains. In her opinion, one thing that is disrupting Americans’ ability to move towards a common ground is ignorance and turning a blind eye to inequality and systematic and institutional issues in our society. Even if people do not agree with each other’s candidate of choice, it is still important to be informed and educated on the bigger issues in our country.

People will believe what they want to believe, but it is up to us as a nation to curate our communities to what will make us feel happy and joyful. We choose our battles and there is no denying that talking politics is difficult and can unearth unwanted feelings, and can lead to us knowing who we want in our lives and who we don’t. Ultimately, it is possible to find a common ground, but in order to get there, it will take energy, understanding, and a mindset to welcome differing political perspectives.