The MTA during the COVID-19 era 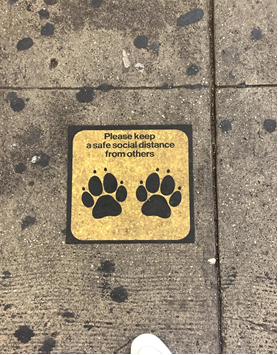 Almost 8 months after New York City’s initial lock down the city is still struggling to bounce back. One of the hardest hit was the MTA who is trying to continue service but enforce safety. Millions of New Yorkers rely on public transportation, especially during the pandemic. New York citizens wondered and questioned the safety of using the MTA’s services during this time. The MTA had no choice but to respond and respond quickly.

All employees are expected to wear masks even if they’re in booths and trains are being stopped to be disinfected, providing “sanitizing stations”, and even switching to wireless payments. In addition, the MTA is now using signs and advertising to advise riders on how to remain safe while traveling and remain safe during these times in general. Throughout all the stations and train lines, there are bright yellow signs with black figures and words asking riders to maintain a safe distance and wear masks.

The question is are these precautions effective and are they enough to encourage New Yorkers to continue to ride trains and busses?

I recently took a trip through 3 boroughs on 4 different train lines and began to notice the changes in the MTA and the train specifically. Areas that were some of the busiest train stations have now become desolate and nearly vacant. December is rolling around and many people are beginning to self-quarantine and isolate themselves to brace for the highly feared and anticipated second wave.

Though many train stations are becoming vacant that doesn’t mean people aren’t traveling. Some people are still traveling out of necessity and are taking safety precautions seriously. For those who are traveling, they’re doing it out of necessity. For people Like Kara Lee, she depends on the MTA. “Honestly I’m just trying my best to stay safe. Grabbing rails through napkins, using my own hand sanitizer, standing at the spots, I’m just doing my best. Hopefully, I won’t catch it, but who knows. I hate that life is this way but there’s no use in moping around” Lee stated. She doesn’t have much faith that the MTA’s steps are enough, but she respects the fact that they’re trying.

One of the precautions that are the most noticeable is the prints on the ground. They’re printed on the ground 6 feet apart and encourage social distancing. Many people use them to remain safe and make sure they’re 6 feet apart. The MTA has even added paw social distancing stickers as well. Riders who have passed by have stopped to take photos of the paws and smile behind their masks. These place spots also match the aesthetic of the other MTA signs.

Many of the electronic screens that are in Train stations are now displaying PSA’s about social distancing and staying safe. Some electronic screens only display the rules and mandates that the MTA has. Most encourage Mask wearing and push the narrative that wearing a mask is being decent and considerate. Though these PSA’s are up some riders still don’t respect the sentiment. During a trip to Manhattan, many riders noticed other’s not wearing masks. Anti-maskers are the newest social pariah.

The Trains benches which usually are stuffed are barely seating 2 people. Although there are no signs about seating, there’s a new unspoken rule: 2-3 people on the benches only. As for the benches inside the station, no one sits in those. Lee states “That’s the unforbidden seat no one sits there”, Lee explains that those seats on a regular basis were looked at as unsanitary but during the pandemic, they’re not even acknowledged by riders.

In Jamaica Queens one of the major stations Sutphin Blvd. Archer Ave JFK airport. This station connects passengers to the Long Island Railroad and the Air train to JFK. The station has multiple entrances and exits, many people are in and out of the station despite the pandemic. The station has these two “sanitation stations” On the Photo on the left you can see who abandoned and poorly treated the sanitizer bottle is. The title on the box is barely legible. ” A passerby mentioned to me how ironic the bottle was while I took a photo of the bottle. “I leave in and out of this station every day, have yet to see anybody use that,” the passerby told me. On the right is the entrance to the ticket booths for the LIRR, it’s a very busy area. After standing there for a few minutes only one person used the hand sanitizer.

New York may be on the verge of another lockdown. The Winter is coming and so is flu-season and a higher number of rates. The city is preparing to go back on lockdown, but many essential workers will have to travel during this time. Public transportation riders are now becoming much more aware of their surroundings. Although the MTA has many precautions some treat them like a choice.