The Re-Emergence of Y2K 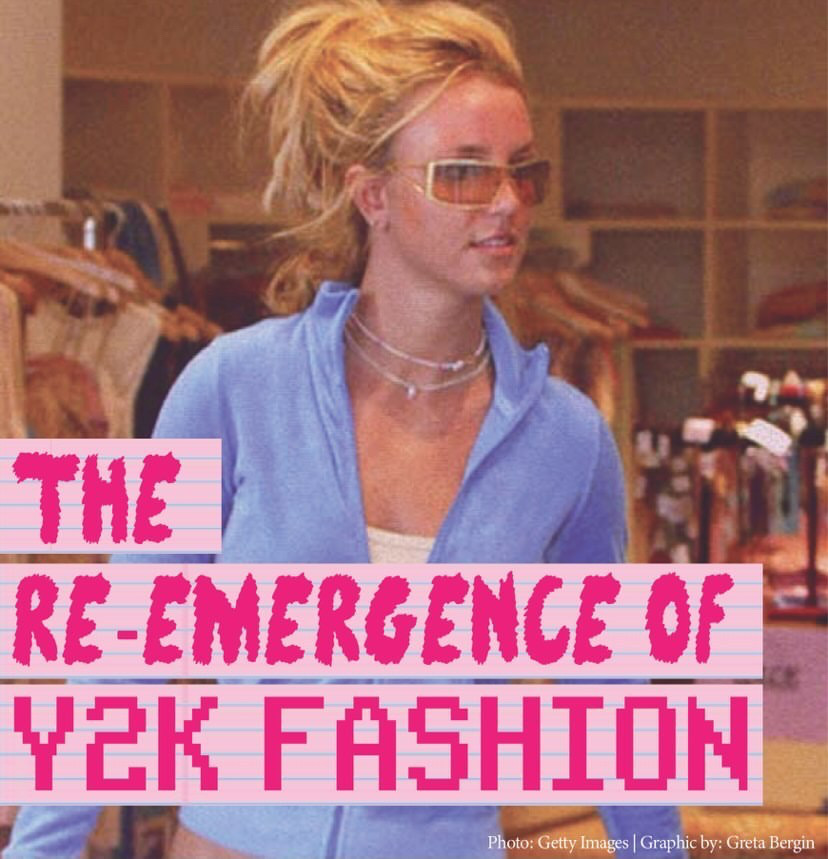 Low rise jeans, animal print, rhinestones, tiny handbags, even tinier sunglasses, futuristic patterns, and cropped graphic tees are just some of the trends that are returning to the minds of American teens in 2020. Y2K fashion is back and following a slightly different path than before. While the eccentric, sometimes tacky fashion of 1995 to 2003 was a result of the anxiety and excitement for the technological advancements of the early 2000s, the reprisal of Y2K in 2020 is driven by fear, nostalgia, and rejection of our current technology-driven society. While the majority of these current trend wearers are Gen Z and were born after the Y2K craze, many modern teens are using this style of dress as a form of escapism into a simpler time with less technology and social media.

Y2K fashion is an era comprising many trends that were either started on the runway, seen on celebrities or taken from regular school kids. Some of the stars and socialites from 1995-2003 that we most remember wearing iconic Y2K gear are Britney Spears, the members of Destiny’s Child (Beyoncé Knowles, Kelly Rowland, and Michelle Williams), Lil Kim, Paris Hilton, and even Disney stars like Ashley Tisdale. Also during this time was the rise of the tabloid magazine, where pictures of these stars wearing Juicy tracksuits, bedazzled tees, and holding tiny dogs, in equally tiny purses, were plastered on every glossy page. Celebrities and tabloid magazines were one of the main catalysts for Y2K fashion and inspired the millions of teens that watched their every move.

So, Y2K is back 20 years later and growing in popularity as a result of apps like Instagram, Pinterest, and Tik Tok. The majority of teens wearing these clothes thrift them from places like Goodwill and Salvation Army, or buy them off second-hand clothing apps, like Depop. But, more and more fast fashion brands, like Pretty Little Thing, Forever 21 and Nasty Gal, are producing new clothes that emulate these old trends. While millennials, and those who actually lived through the Y2K era, complain about how these new clothes are “watered down” versions of Y2K, casual stores are a driving reason for success in the reemergence of Y2K fashion.

But, there is a stark difference in Y2K inspiration today versus back then. In the late 90s, Y2K was born as a result of anticipation for the unknown. The new millennium promised inspiring technology, further globalization, and gave people something to actually be excited about. Now, Y2K is making a comeback during some of the darkest days of American history. The late 2010s, and early 2020s,  are characterized by immense hatred, as a result of Donald Trump, divisiveness in American politics, civil unrest, and now a pandemic. Furthermore, we almost have too much technology now. Almost everyone, even nine-year-olds, have an iPhone and our security is constantly being breached and taken advantage of by various online platforms.

We also are more connected than ever before. Most people are members of multiple social media platforms, while connected to the same people on multiple platforms, if not more. . Although good for the spread of ideas, it also allows for hate to fester at exponential rates and for American teens to practically be glued to their phones. This has caused an increased amount of depression and anxiety in our youth. It’s increasingly difficult for teenagers to just have a “small dose” of social media, which is what they typically recommend to combat social media-induced depression, because of the ‘fear of missing out’ (“FOMO”) factor and alienation that can follow. The COVID-19 pandemic has also affected teens drastically and has made them turn to social media and their computers even more, due to being stuck at home and learning via online school. It feels as if our every day revolves around our computer or phone. Many teens look towards the past as a form of escapism for the stress of our current modern world. While we are the most connected we have ever been, we are also feeling the most alienated. This has manifested into an idea of  “romanticizing the past”, which many people have been critical of Gen Z for. Gen Z romanticizes to gain some nostalgia to combat fears of the future.

The pandemic also has an effect on our access to Y2K fashion because it has allowed us to stay inside and watch old TV shows, movies, and music videos. It has also increased our online shopping habits and has given us an ample amount of time to scroll through endless Tik Toks, Pinterest posts, and websites to gain inspiration. So, the pandemic is not only helping by driving a need for nostalgia, but has also gifted us the time to use it.

It’s unsure how long this Y2K craze will last, but I predict it will ride out for at least a few more seasons. This is because we, as a society, are always going to look upon the past for inspiration, it’s practically human nature. Borrowing trends from the past will only continue as we delve further into the unknown of technology, because we will continually need something to escape to. What will be the next era of fascination? I predict the early to mid 2010s (2012-2015) will already be making a comeback in the coming years, due to a few Tik Toks I have seen of younger Gen Z teenagers romanticizing the idea of being a teen during 2014. But, we will truly never know until the next trends are upon us, so let’s just live out the comeback of Juicy Couture while we can!