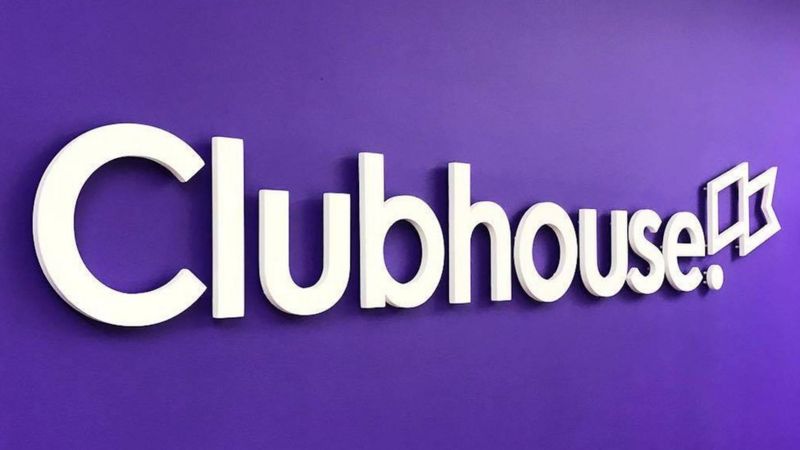 Scrolling through the Clubhouse app for the first time, I was instantly baffled. There was no place to write or post anything – well, except for the biography on your profile. Yet, this app is currently all the craze in professional industries across the United States – some even think that Clubhouse will become the new digital networking hub.

My friend Lauren, who also happens to be a freelance arts writer/Journalism and Theatre double major/writer for her college’s publication used one of the only two invites the app provides you to rope me into the newest, most exclusive social platform. Currently, Clubhouse is not open to the public, and the only way to get in is through a friend’s invite. This already sets Clubhouse apart from universally accessible apps like Twitter and Instagram and gives it a “VIP” sort of status. Once you’re in, you automatically feel like an insider. 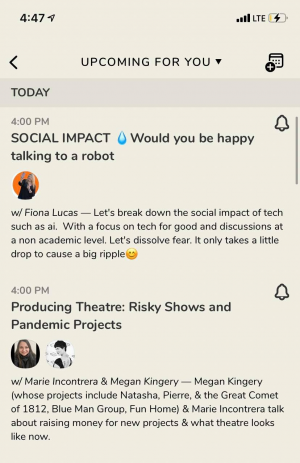 Still, my first week on Clubhouse was uneventful. Since you cannot post anywhere or direct message anyone, the only form of communication offered on the app is audio chat. Users can host talk sessions pertaining to certain topics or even “clubs” on the app – which you also have to be invited to join. Lauren invited me to join a club called “The Interview Room,” which seems to be composed of arts workers and journalists.

Anyone can listen in on any session they come across, however. Clubhouse suggests certain sessions based on your interests and people you follow, but you can also find just about anything by scrolling around the app.

The first session I listened to was one that actually featured Zendaya as a speaker, who at the time, only had two thousand followers on Clubhouse – so hopefully that gives you a better idea of just how under-the-radar this app was at the time, and still is, for the most part. These sessions are almost like live podcasts or panels, and only the host and those selected by the host are able to turn their microphone on and speak. Similarly to Zoom, you can “raise your hand” if you’d like to speak, but it all depends on the openness of the conversation.

My biggest hope as an “outsider” that was somehow smuggled onto Clubhouse was to see what all the fuss regarding networking opportunities on the app was about. I didn’t understand, at first, how to connect with anyone when I couldn’t reach out to them. So, I did the only thing I could do, and I just followed a ton of names I knew from the arts & culture industry, which is the industry I am hoping to break into post-graduation. To my surprise, a few of them followed me back, despite not knowing anything about me apart from the few clues I left in my profile’s biography, which I realize now is almost like a digital “elevator pitch.”

This is what made it clear to me just how advantageous the lack of comprehensive identity and communication on Clubhouse is, especially when the app is not yet open to the public: everyone assumes you’re on a level playing field. My profile reads “freelance arts writer,” which is true. But there’s no ability for users to see how little or how many opportunities I’ve had as a 22-year-old arts writer so far, or that I don’t have my Bachelor’s degree quite yet. There’s a sense of both equality and elitism established by this – which are two words that should be mutually exclusive, but on Clubhouse…they aren’t.

By the end of my first week, I only had 10 followers on Clubhouse, but they all turned into real-life connections when I followed them on other platforms such as Twitter and they presumably noticed that I was a connection from Clubhouse and followed me back. The online relationship between us was formed when there was nothing on the table. It feels both alienated and intimate, and it’s a networking style that I have never seen before on the internet. 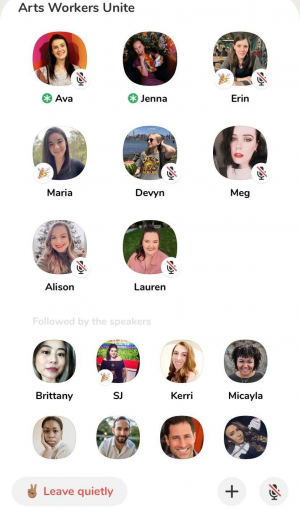 Serendipitously, as I was lurking the app one school night to see what kinds of conversations were occurring, and I saw one titled “Arts Workers Unite,” which featured many people I admired the work of, and people I even had worked within the industry. They’re all involved in a grassroots campaign to demand relief for arts workers during the pandemic called “Be An #Arts Hero” which I actually wrote about for The Monitor last semester. One of the speakers is actually someone who has become known by hopefuls like me for generously providing career advice and resources for those wanting to work in the theatre industry on her Tik Tok profile. Yet, I never felt confident enough to reach out to her personally for insight. I immediately entered the room, and they opened up the discussion to any listeners that wanted to contribute. So, shedding my chronic imposter-syndrome, I did. And for the next hour, I got to converse and connect with people I had long known the names of and followed the careers of. After our session ended, they followed me back.

At the beginning of my inside investigation of Clubhouse, I genuinely didn’t understand how there could ever be networking opportunities on an app that hardly allows you to communicate. But that’s exactly what is so special about Clubhouse – there’s only one way to “shoot your shot,” and it’s to put yourself out there to be seen and heard. Follow people so they check out your profile, listen in on small-group sessions, and see if they welcome you to the table. I never expected to have the most successful singular networking experience of my life on Clubhouse, but when you strip away the “likes” and “shares,” people can see a simplified and straightforward version of you. Without a long-standing established platform for users of Clubhouse, it’s the perfect place for college students to congregate with potential connections.

My undercover mission of discovering what the point of Clubhouse is for aspiring, not-yet-established young professionals like myself turned out to be not-so-undercover after all, and out of it, I emerged feeling confident and in control of my career. Retrospectively, I think that the “likes” and “shares” were a large part of what caused my imposter syndrome in this first place. They were what, I felt, set me apart from all the people in the industry I looked up to. Now that they’ve been taken away, I don’t feel like a college student limited by a lack of status – which kind of feels like being a pre-teen on Thanksgiving desperately wanting a seat at the “grown-up” table, but never feeling worthy of asking for it. On Clubhouse, I feel like I’ve been sitting at the “grown-up” table all along.