The Misconceptions of False Rape Allegations and Victim Blaming 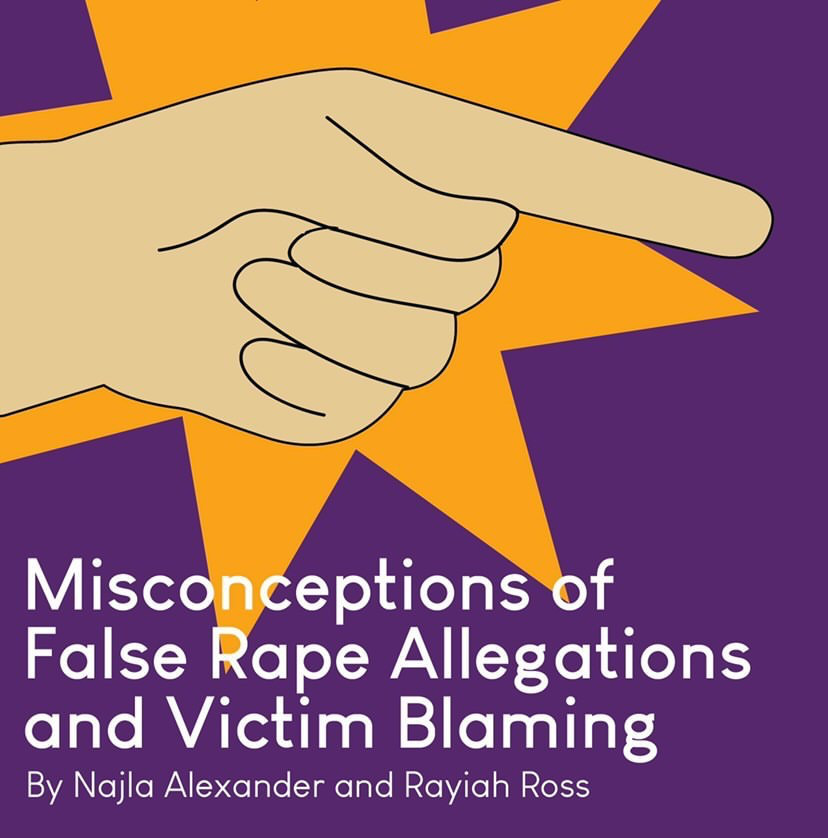 Johnny Depp and Amber Heard’s relationship has been a talk of the town for years now. Depp and Heard have had a rocky relationship, to say the least. After their wedding in 2015 and quickly divorcing in 2016, so much mystery began to form around their relationship.

On May 23, 2016, Heard filed for divorce from Depp before obtaining a temporary restraining order against him. She alleged that Depp had physically abused her during their relationship. Heard described a situation in which Depp threw his phone at her, leaving her with a bruised face. However, a police spokesman told People that an investigation into the domestic incident radio call found that no crime had taken place. Heard received $7 million from the divorce but donated it to charity.

Heard then went on to write an op-ed for The Washington Post in which she spoke about the treatment of women in domestic abuse cases. In 2019, Depp sued Heard for $50 million for defamation because of the article. This led Depp and Heard into a month-long libel trial in which Depp lost. While the court denied Depp’s right to appeal this court ruling, this loss cost him his role in Fantastic Beasts and Where to Find Them 3.

The story got much more complicated In January 2020, when phone recordings obtained by the Daily Mail were released. In these recordings, Heard admitted to hitting Depp and pelting him with pots, pans, and vases in the explosive audio confession.

This case brings up an interesting and new dynamic about abuse and assault cases. What happens when the victim turns out to be lying? Understandably, many people are concerned about libelous statements and fabrications in sexual and physical assault cases, but it doesn’t happen as often as you think. What does happen however is victim-blaming.

Victim blaming is seen in the criminal justice system all the time, whether it’s racial discrimination or sexual assault.  Victim blaming is everywhere in our judicial system today. “Why didn’t you speak up sooner?” “What were you wearing?”  “Were you drunk?”  All questions asked by skeptics of the victim, more often than not those are men in authority who are probing women to try to speak out about their domestic abuse and violence. Victims are constantly being questioned and doubted of what really happened to them as if it was somehow their fault for being assaulted or if the assault ever happened at all. These blaming mechanisms create misconceptions in media about how rape allegations are made up by people who lie and should not be taken seriously when that is far from the case.

Victim-blaming is causing the real problem as it allows the predators to walk free on the street with the likelihood to assault another person. If somehow, we were able to punish people who did make false rape allegations, that statistic would be much lower. Victims already have enough fear that no one will believe them where they’re making true allegations and the pressure would be so much worse if victims were incriminated for false allegations.

In reality, Every 107 seconds someone is sexually assaulted, totaling “an average of 293,066 victims (age 12 or older) of rape and sexual assault each year” According to RAINN, Rape, Abuse & Incest National Network, Roughly a mere  230 out of every1,000 sexual assault cases are being reported to the police leaving about 77%  of all assaults to go unreported. Meaning about half the rape allegations reported are the ones considered to be false, about 0.5 percent. The biggest misconception when the term “false rape accusations” is heard in media is that the women who reported it are lying. When there is a variety of reasons that those “false rape accusations” are deemed false. 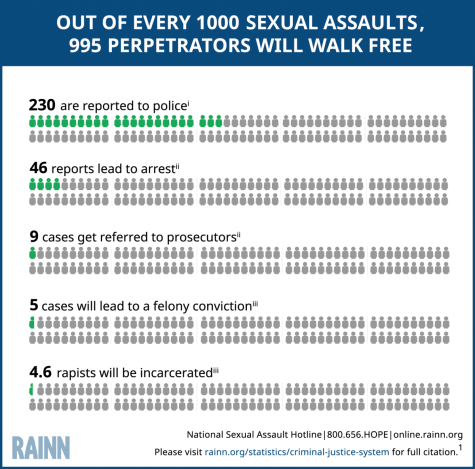 Following what’s outlined in  Quartz’s “The Truth About False Rape Accusations” “The Truth About False Rape Accusations” people who make the so-called “false accusations” have quite similar histories, but something different that drives them. Motivations that deal with personal gain, possible mental illness, revenge, and need for an alibi, but it is vital that police and the justice system start to believe their stories. These “false accusers” are the ones who are targeted the most by predators because predators think the “false accusers” will not be trusted by authorities because of their past, so they take advantage of that already broken system. Whether claims sound outrageous from someone who has a history of lying or from someone who has no history of lying you believe them. Not saying you aren’t going to be skeptical, but the majority of cases can be believed but are chosen not to be believed in the first place.

Police hold the power to deem the accusation false and will often deem claims false for an incriminating detail on the accuser or a flaw or change in the story or for other minute details investigators can find. Making the accuser look like this bad person who made it all up because of one small detail that is not even relevant to the situation at hand.

One recent incident is the case of Daniel Holtzclaw, a former Oklahoma police officer sentenced to 263 years in prison. Holtzclaw intentionally targeted women with a criminal record who felt like if they came forward they would not have been believed. He used the power and trust of being a cop to target, sexually assault and exploit these women believing that he would not get caught. The Holtzclaw case is the biggest example of why women recant their accusation because they feel like in the end they would not be believed, they are not lying. They just feel even if they do report the crime it would not be taken seriously, so because the accuser recanted her story the case is labeled as a “false accusation.” Making the accuser seem like a liar when that is not the case.

Legal repercussions inflicted on women whose cases were evaluated as a “false rape allegation” will cast a further dark shadow onto victims who want to speak up about the abuse that happened to them. This will cause them to continue to be in fear of not being believed and if their case gets deemed “false” and succumb to legal penalties. Girls are taught that men can’t control themselves and that women should protect themselves. Instead, we should be teaching boys how to properly treat women and that rape and sexual assault are wrong.  94% of women who are raped experience PTSD after they are raped. Through all of this trauma and pain, many rape victims feel alone or haven’t told anyone about their assault for fear of being embarrassed and the fear of not being believed.

The misconceptions of false allegations and victim-blaming would be much less prominent if we as a society were able to understand the utmost importance of believing women when they talk about being assaulted. In the day and age of women taking extra precautionary steps to feel safe all because of the fear of being assaulted should not be one that is normal anymore. Women having to hold keys between their fingers as weapons, carrying mace and/or tasers, checking under their car and in their backseats before entering their car, feeling like they can never jog by themselves at night or in the day, can not walk alone at night, avoid getting into elevators alone with a man or a group of men, and the list goes on. When women should not feel like this every day of their lives, in fear of being sexually assaulted. Typical accusations are that she was walking alone at night, wearing tight clothing, drinking, and being promiscuous.

But we set the standard for the future generation and it’s about time men stop asking women’s clothes for consent, and they start asking the women themselves.