Why Do Women Believe in Astrology More Than Men? 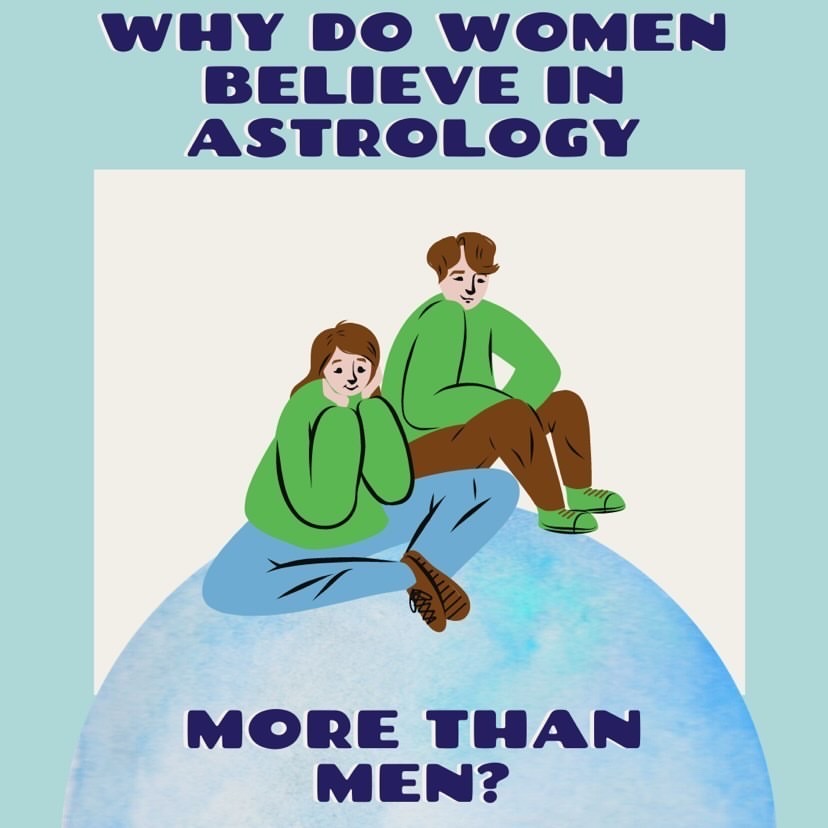 In recent years, there has been a clear boom in astrology and its likeness amongst many people, especially women. Astrology is typically advertised and catered towards a femme population through magazines, clothing, and stationery merchandise. Due to this feminization of astrology, many others, like men, tend to not believe or take it seriously because it is seen as immature and “too girly”. This gives astrology a negative connotation because it undermines, degrades, and dismisses the validity of astrology just because the majority of women are interested in it. The perception people have of astrology is skewed for that reason, making women’s interests feel invalid and insignificant.

Many reasons boil down to astrology only being marketed to a specific target audience of women. Oftentimes when things have a target audience of women, similar to makeup, boy bands, and candles, men view these as lame and frivolous. This association makes men guard their masculinity by denying and shutting down conversations surrounded by astrology. This refusal to take part in something that actually has no gender is what gives astrology the image of being only for women. We can all thank toxic masculinity for that. Society also contributes to this problem by only marketing astrology to women. This will turn men off from wanting to learn about astrology out of fear it is not in their character or nature.

Additionally, Astrologer Ash Reed theorizes why men are opposed to astrology by stating, “They’re not as open to expanding perspectives about who they are”. They explained men are too egotistical to want to look further into themselves because most men think they know everything about themselves. This perspective is oppositional to women because women are open to expansion and working on themselves. This theory applies to why men are turned off by astrology because, again, being introspective is seen as feminine. With that, astrology has become an easy thing for men to pick on women for because they categorize it as fake with no concrete proof. However, astrology is well received amongst women for that same reason Ash Reed explained. Women find comfort in astrology because it is another mode of communication they can use, either with others or spiritually. They feel included in a space where they know they are safe. It is the same as when men find interest in things that are perceived to be male-dominated, like cars, football, and video games. They have their own niche of interests and mode of communication as well. The difference is they are not as scrutinized as women are for their interests.

Now, not every man who disagrees with astrology or denies its validity is sexist unless the refusal stems from their toxic masculinity. Toxic masculinity has ruined many things for women. For example, wanting to enjoy the same things as men to even enjoying things that originally have no gender, like astrology. When really breaking astrology down further alongside gender identity and presentation, astrology is not created only for cis women and never has been. Many planets and signs are known to carry certain energies or present either way of a gender binary. However, this is not entirely true, due to the fact that gender is not binary. In fact, some planets are neutral. The planets that are known to carry and present themselves as feminine and masculine stem from the signs that are attached to that planet. For example, Mars rules Scorpio, and Mars is known to be a masculine planet. This does not mean that people with Scorpio placements are more masculine than others, but it does mean that certain traits and qualities are deemed as masculine when they are not only exclusive to men.

With gender being on such a wide spectrum, modern astrologists have disregarded gender in their readings to be inclusive to all; the way astrology has always been intended. Making By excluding gender, does not change the efficacy or substance of the content but helps bring in a wider community of individuals. This divide in astrology based on gender hurts the ideas and spirituality of the history of astrology. By closing this gap, it will help drive the stereotype away of astrology being a “girly interest”.