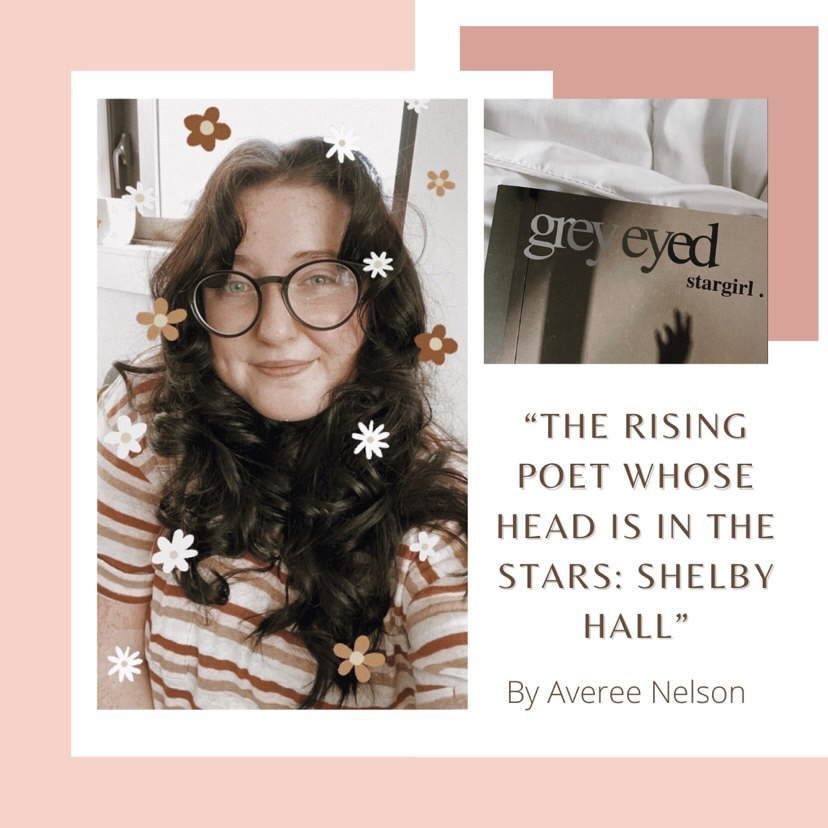 After 10 years of thinking and dreaming about publishing her first poetry book, Shelby Hall took to her Instagram, surprising her followers that grey eyed would be ready to order in a mere few days. Putting it simply, Hall wrote in her Instagram post, “My name is stargirl (Shelby if we’re getting literal) and I am now a published author.”

Hall is 23 years old, living in Brooklyn, New York, and is a Senior majoring in Digital Journalism at Marymount Manhattan College. Hall’s writing endeavors go far beyond poetry. She is the owner and editor of the Venus Rising blog, a guest writer for MMC’s student-led online publication The Monitor, as well as a writer and Campus Trendsetter for Her Campus.

During her last semester of college, one of the busiest times in a student’s college career, Hall finally sat down and turned her vision of her own poetry book into fruition. After years of spurts of creativity and tumultuous periods of her life, Hall is excited to enter the next chapter of adulthood with a poetry book encapsulating her growth as a person from middle school to the present. Hall says: “I feel great just because it’s been so long coming, and I should have done it a long time ago.”

It all started back in middle school when Hall became interested in the art of rhyme schemes, pentameter, symbolism, meter and the aesthetics of poetry. Although it wasn’t a revelation at that moment she was a poet, it set the foundation for her furthered interest in highschool.

“I wrote a few poems in middle school that, like most of them, sucked because you’re in middle school,” Hall said. Not all of them “sucked.” She included only one of her poems from her middle school days in her book called “She is fire.” This poem also inspired her to get a tattoo of it with the same words.

That poem is indicative of the years to come. In her 10th grade of high school, Hall was in a poetry class where she was motivated to write whatever came to mind and express herself freely. “A long time ago, I took a poetry class in high school, and the teacher was very sweet and just wanted you to get out whatever creative words you want to get out,” Hall said. The following summer she went to a camp where she spent a lot of her time writing poetry. She was on fire with new writing ideas, playing around with different rhyming schemes.

One of her favorite poems was birthed during her 10th-grade year. “Red” was developed out of a project her teacher had assigned. Hall says, “She asked us to describe a color without writing the color in it. And so I described the color red without ever saying the word red.” Hall is particularly proud of this piece. It has been published in a literary magazine of her previous community college, as well as some other literary magazines. The interesting part of the poem is that it begins by describing the color red without using the word red, but by the end of the poem Hall closes it with these lines, “You now feel a new shade. You just feel blue.” There is this turn into a new color that is clearly stated, and this is one of the poems that Hall wants everyone to read and interpret for themselves.

Hall goes by the alias of stargirl on her social media and it is also the name she uses in her book. She started adopting this name as her own during these same years of high school. “It basically started in high school with a teacher was saying that my head was in the clouds, and then my friend said ‘it’s in the stars’ and then they started calling me stargirl,” Hall said. From that moment on Hall curated her internet presence through the lens of star girl and she developed a name for herself.

“Flash forward a little bit, I wrote over those years off and on, usually only when I felt sad or heartbroken I would be able to write,” Hall explained. Most of her poetry was ignited by her own personal heartbreak and sadness while trying to figure herself out during her teenage years.

In her last year of high school, Hall was aiming to self-publish her poetry book under a different title. “Senior year, I dated somebody who didn’t like the idea of my poetry stuff, and he was a music guy, rode a motorcycle, whatever, and I had called [the book] A Girl is a Gun at that point because I thought that was super cool, even though I don’t think it’s cool anymore.” Her plans to publish her poetry were halted when she and her boyfriend broke up. Even though the breakup offset her initial publishing date, the months following Hall had a creative spurt and wrote over fifty poems. Throughout college, she continued putting her thoughts to paper and finally decided a month or so ago that she would finally make her dreams come true and self-publish.

grey eyed can be described as a coming-of-age story. It unfolds as a story of a girl going through heartbreak with very dark periods and themes but then takes a turn into a flourishing and bright story of who is now stargirl. The book is split into chapters, beginning with the poems from Hall’s middle school days, then moving on into her heartbreak in high school, and ending with a chapter on her life now. Hall includes a mix of themes surrounding nature, environmentalism, human feelings, and the change in her life throughout the years. “I did change around some of the words if it was very cringy when I was editing, but I tried not to because I wanted to bring true to how I was feeling bad at this time, I can’t just erase that,” Hall said.

Hall stays true to her depth and emotions in poems from darker and earlier times in her life. This decision, on her part, to validate these raw feelings brings a breath of fresh air to her poetry. It shows a metamorphosis of Hall’s childhood into her adulthood.

Now she is able to share her growth with the world and continue her writing journey in her upcoming post-graduate life. Hall already has a title for her next book, which she hopes will be published sooner than 10 years this time around. She will also be participating in a writing event called “The Playground,” where writers conjoin their creative minds together to answer different prompts every night that the event is taking place. It’s a space that garners a lot of inspiration and nuanced styles of writing for Hall’s poetic endeavors.

With both feet on the ground and her head in the stars, Hall is ready to take the world by storm in the coming years.