Ginny and Georgia: The Problem With All-White Writing Rooms 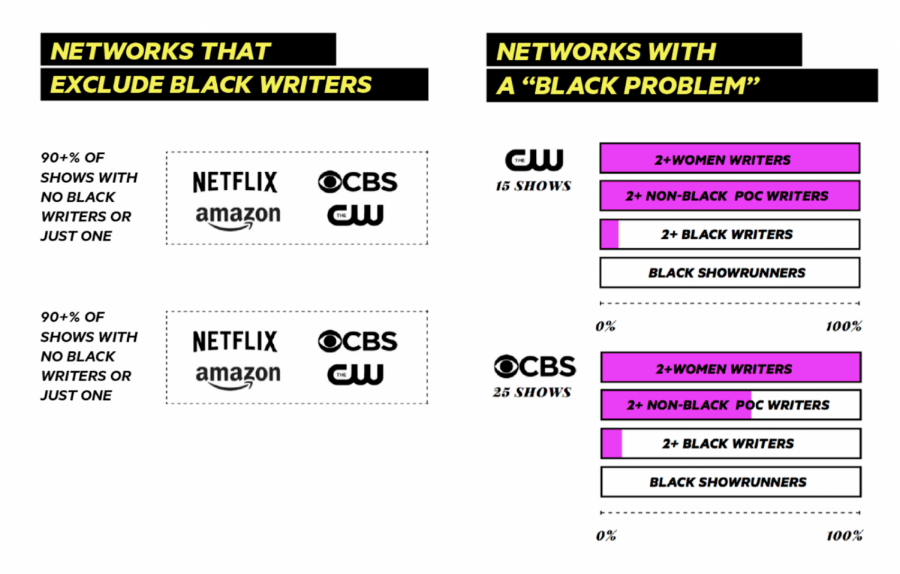 Graphic via Color of Change

Ginny and Georgia is one of the newest and hottest Netflix TV series of this month. The story revolves around a young mom of two children navigating life, learning and growing from their mistakes while discovering new things about themselves and the loved ones around them.

The eldest daughter, Ginny, is a biracial character and with a lot of shows on Netflix that have biracial characters, there is a misrepresentation happening that you notice right away. Ginny and Georgia is a prime example of all-white writers casting a mostly-white cast where the writing focuses on black issues but fails miserably to properly represent those issues in every aspect.

You see many examples of microaggressions when a white-male cop gives Ginny the side-eye when pumping gas into what one would call “an expensive car” because of the color of her skin. Her so-called friends mention to her in passing “what are you?” or “your look is so exotic” and the comments do not stop there. In one scene, there is a teacher attempting to brush out Ginny’s hair to control her look. Her “friends” laugh it off but Ginny is not amused by the situation. These situations are terrible but true and they happen every day. In one episode, the characters Hunter and Ginny argue about who faces the most oppression; the young black female or the young Taiwanese man. Ginny wasn’t trying to dismiss the hardships Hunter faced but was trying to get Hunter to understand that her experiences are her alone and are not the same as his hardships.

In a Teen Vogue interview, Professor Kevin Nadal, a researcher and expert on the effects of microaggressions on racial/ ethnic minorities and LGBTQ people, describes microaggressions as “the everyday, subtle, intentional — and oftentimes unintentional — interactions or behaviors that communicate some sort of bias toward historically marginalized groups.”

This new TV series talks about serious issues that young, black Americans face every day. Although, Netflix is trying to make people aware of this issue, unfortunately, with the lack of P.O.C. in the writing room, they are adding to the problem. They don’t know what a young black American has to deal with on a daily basis and they don’t understand the complexity and emotion that comes with being a P.O.C.

In the media today, there is a stark difference between strides towards true representation and the facade of inclusion. It is easy for media companies to include diversity and inclusion statements on their websites, but it is another thing to actually shift the percentages of who is in the company and who is in leadership positions. According to the article “Why Hollywood’s C-Suites have so few black Executives” by Ryan Faughnder and Meg James in the Los Angeles Times, there is an increasing issue coming forward that even though we are talking more than ever about diversity in entertainment and media, there has been little to no improvements. As reported in UCLA’s Hollywood Diversity Report: “researchers found that 91% of studio heads are white,” after a review of 11 major and midsize film studios. Although it is crucial to increase the number of people of color in media companies as a whole, it is also extremely important that people of color have a voice in the C-Suites where the decisions are being made and to ensure that authentic and relevant stories are being told.

When Viola Davis became the first black woman to win the Emmy for Outstanding Lead Actress in a Drama Series in 2015, it was a historic moment in the entertainment industry, but it is also memorable because of Davis’s acceptance speech. “You cannot win an Emmy for roles that are simply not there,” Davis said. In a Hollywood where there are white writers, actors, directors, producers and executives, there is little room for an authentic story featuring a person of color to be told. Black women cannot win Emmys for their acting when there are no stories being made for them. Once there are more black and brown executives bringing in more diverse writers, then there will be roles made to represent people of color. A strategy to make Hollywood more inclusive cannot merely start with a statement on the notion to do better but must be followed through in order to create the visibility that is needed and to tell the stories that are lacking.

TV shows and movies like Jane the Virgin, To All The Boys I’ve Loved Before, Black-ish, Empire, and all of Shonda Rhimes’ works, feature primarily Latino, Asian, and African American casts. These great shows and many others are thriving in the on-screen diversity department, yet so many are failing to include diversity in the writing room. A Writers’ Guild of America report released that staff employment for people of color actually decreased between 2011 and 2014, from a peak of 15.6% to 13.7%. The number of executive producers of color also decreased in those seasons, from 7.8% to 5.5%.

Stefani Robinson, a writer for the TV show Atlanta, said in an article written for The Guardian, “I’ve seen the impact of a diverse writing room. It’s a shame the rest of the industry doesn’t seem to have the desire to change.” Robinson goes on to explain that the reason for a lack of colored television writers – being anyone who is not white – is that Hollywood is an “intricate machine that traditionally has served and supported an overwhelmingly white demographic . . . Generally speaking, white executives, producers and showrunners are influenced by the operations of their predecessors and their predecessors and so on.”

Often enough, a black comedy writer will work on a black show. Not to say that black writers can’t work on “white comedies,” but they’re pretty rare. Most black comedy writers get their experience and credits on black shows while also being more likely to hire a POC cast.

Color of Change reported that the executives running television platforms today — both traditional networks and emerging streaming sites — are not hiring Black showrunners, which results in excluding or isolating black writers in writers’ rooms and in the creative process. Over 90% of showrunners are white, two-thirds of shows had no black writers at all and another 17% of shows had just one black writer. The ultimate result of this exclusion is the widespread reliance on black stereotypes to drive black character portrayals, where black characters even exist at all—at best, “cardboard” characters, at worst, unfair, inaccurate and dehumanizing portrayals. Because of the non-inclusive writer’s room, you get many tropes including things like “the black best friend,” “the funny-accented foreigner,” “the asexual Asian male” and “the wise-cracking help.”

The “black best friend” character has a role to either revolve almost entirely around a white character or serve as a conscious effort for a white character/writer to appear inclusive. The “old Funny Foreigner” jokes tend to be stereotypes about a particular country by making up a country, choosing a real country almost at random, and ignoring any actual facts about it. The character is just a  “generic Latin” or “generic Slav.” Playing up their ethnicity because they can get away with it.

Typically when Asian males are featured on television, they are portrayed as either too highly emasculated to be seriously considered as a romantic interest or just completely asexual. Raj from The Big Bang Theory takes constant jams from the other characters and finds himself unable to talk to her because she is a girl.

The “wise-cracking help” is any butler, maid, slave, or servant who is heavily sarcastic to their master and/or their master’s guests and yet still manages to keep their job is this trope. Other characters of color generally exist only to support and advance the development of white characters.

The lack of diversity in writing rooms throughout history in Hollywood has reflected very specifically on who is cast, with all-white casts being portrayed in return or even roles that should be played by people of color being played by white people. In a study called “Behind the Scenes: The State of Inclusion and Equity in TV Writing” released by Think Tank For Inclusion and Equality (“TTIE”) and Pop Culture Collaborative, more issues and experiences that diverse writers have faced and been facing are revealed. It was revealed that even if diverse writers manage to get their opportunity to write, they are still very often isolated and pushed to lower levels, in turn having no power to contribute and having little to no room in casting when it comes to wanting increased representation on screen. The study also found that when writers are in the pitching room, 53% of diverse writers have been rejected, only for a non-diverse writer to pitch the exact same idea and get accepted. Why is it that diverse writers are not being seen and heard as they should be?

Having to repeat themselves in meetings to be heard, getting their ideas stolen, having to take a demotion to be on staff, or being hired only for a company to meet their diversity quota for the year. These instances and results are grim, but it’s inspiring and optimistic to see the strides being taken to improve diversity in all writing rooms within Hollywood. The TTIE  study garnered immense support with a written letter directed at the industry, collecting signatures from various TV writers, industry insiders, and even show leads, including Joss Whedon, Lena Waithe, Jill Soloway and many others. The study proudly included ways to improve representation and called for opportunities to change processes and incite more opportunities as well. It’s so exciting to see more shows being released on popular streaming services that have been increasing diversity not only on-screen but off-screen as well. In the writing room and even behind the camera. In 2018, when black Panther graced the Marvel Universe on the silver screen, Ryan Coogler, a black director, led the diverse creative team behind the groundbreaking film. Netflix has been doing a better job recently producing shows starring black and Latinx characters but that all starts in the writing room.

POC writers exist. They’re alive and flourishing in what seems to be a very undisclosed and concealed way. What POC writers need are opportunities to not only break-in, but stick around. They deserve the opportunity to be heard.