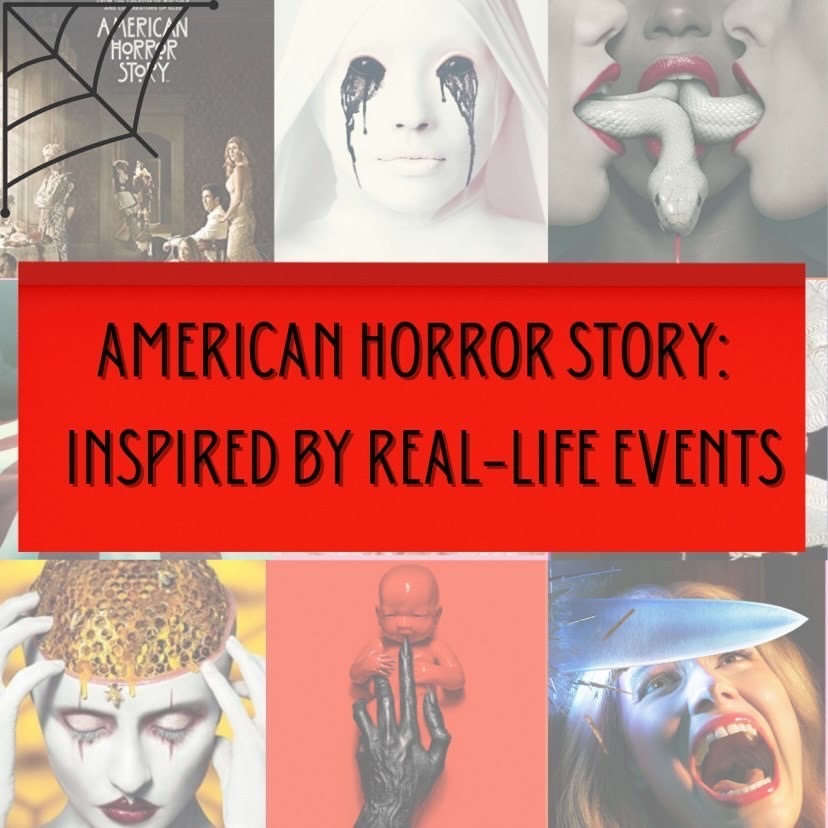 American Horror Story, the very popular anthology horror TV series created by Ryan Murphy and Brad Falchukl, has a total of nine seasons on Netflix and is currently filming the tenth. Throughout all of the nine seasons, you see recurring actors playing different characters with every season being a new story, but all somehow connect. You also see outrageous events happening to reference real-life serial killers and cases where strange occurrences happened in every season.

One of the most notable  seasons of American Horror Story is “Murder House.” Where it is centered around a house that holds the spirits who died there. The physical house that was used for filming is located in Los Angeles. Fans of the series come from all over to see the infamous, said-house to take pictures and videos outside. At one point even a few crazed fans broke their way into the house. A married couple, Ernst Von Schwarz and Angela Oakenfold have recently bought the house without the knowledge of what the house came with. Their realtor failed to mention how famous this house was and how the couple  would be dealing with fans constantly stopping by and some even trying to break in and they claim that the house is haunted by “two ghosts.” Wishing their realtor would have been more honest with them, and as the result of withholding information from the tenants, they are going to sue their realtors.

There is a long history of tragic events that happen in the “Murder House” season. One is the two dead nurses killed by a random man who came to the house one night. The inspiration came from an incident in 1966 according to Biography, where a man named Richard Speck went after eight female nurse students where he tortured, raped, and killed them in Chicago.

The Black Dahlia reference is one of the most recognizable stories featured in “Murder House” where a young woman by the name of Elizabeth Short looking for fame in the 1940s. She was found murdered with her a permanent smile cut across her mouth and body chopped in half.

One of the main characters in the first season goes by the name of Tate Langdon, played by actor Evan Peters, who you later discover is a ghost bound to the house along with many others. Tate is responsible for a school shooting targeting specific teens, the idea of which originated from the horrific Columbine School shooting. One of the Columbine shooters asked one of the teens they murdered if they believed in God or not, and so did Tate before shooting one of the students.

The second season of the series follows a journalist, played by Sarah Paulson, going undercover into a mental asylum to reveal the unethical practices they force onto the patients; based on a female journalist named Lana Winters who risked her life to expose their cruelty. A German doctor, Dr. Arden, at the asylum would perform unethical and unnecessary surgeries on the patients to torture them if they stepped out of line. This real-life doctor is based on an officer who worked as a doctor at Auschwitz, according to an online publication called Auschwitz.  SS Officer Josef Mengele performed far worse surgeries and experiments on inmates than seen on the show.

Another doctor at the asylum, known as Dr. Thredson, used victims that were his patients and took their skin to decorate his home with. The real-life counterpart, according to allthatsinteresting, is the notorious psychotic serial killer, Ed Gein, who also used their victims’ skins as lampshades and even made bowls from their skulls.

The “Coven” season takes place in New Orleans where it is known for supernatural legends and where different types of magic are practiced. One of the characters, Delphine LaLaurie, known for her chamber of horrors where she tortured and killed slaves to use their blood because she thought their blood made her look young. She is based on Madame LaLaurie, a New Orleans Socialite who committed those same heinous acts, but there is some debate on whether she actually used the victim’s blood to keep her young according to allthatsinteresting.

Voodoo is widely practiced in New Orleans and in the culture, there is a gatekeeper, of sorts, called Papa Legba. He is able to walk the line between the land of the living and the dead, a spirit of the crossroads where he can grant you permission to go to the spirit world to talk with certain spirits. In the Haitian Vodou and New Orleans Voodoo culture, Papa Legba is very real and is described as a misunderstood spirit.

The Voodoo Queen of New Orleans, Marie Laveau, as shown on the show is very powerful in how she practices magic. Even after her death many still believed in her powers of healing that people still visit her tomb to this day to ask for her guidance.

The fictional character Axeman is based on the real-life murderer, where he was a musician who played Jazz music at local bars and then killed at night. He broke into houses killing his victims with an ax and dismembering their bodies. Like on the show, the actual Axeman did write letters to local papers threatening anyone who did not play jazz music on a particular night would face his ax.

The season shows the audience the horrors of what some circuses went through because the performers were seen as “abnormal” and were outcasted from society. Twisty the Clown was inspired by the serial killer John Wayne Gacy, who lured teenage boys to rape and murder them but was known as the “Killer Clown” according to Biography.com.

Jimmy Darling was a heart-throb character who was born with ectrodactyly which gave him claw-like hands, Grady Stiles Jr. the real-inspiration but was no heart-throb, he was responsible for murdering his daughter’s fiance, according to allthatsintersting.com.

The beloved character is known as Pepper, who had microcephaly, a neurodevelopmental disorder that causes an unusually small brain and skull. Pepper is based on Schlitzie Surtees, according to thehumanmarvels.com. The real-life “pinhead” where he was a sideshow attraction in the 1900s, always sweet to everyone just like in the show.

The Conjoined twin characters Dot and Bette, were real-life performers, in accordance with thehumanmarvels, by the name of Violet and Daisy Hilton. The twins were conjoined at the pelvis and in the 1920s, they performed along the side of Charlie Chaplin.

“The Man With Two Faces” is a man named Edward Mordrake that has two faces, one of the back of his head. He was a young nobleman known for his intelligence and musical abilities, but the other face he called his “devil twin” because he swore he would whisper horrific things to him. That when Edward was sad, the other face would smile, and finally being driven mad by his other face he committed suicide by the age of 23.

The museum is shown in “Freak Show” where they were taking people who looked abnormal and had oddities killed them so that they could use them to be shown in the museum. This museum is very real and is called “The Mütter Museum” located in Philadelphia, PA.

The “Hotel” season takes the audience through the many twists of a hotel built specifically to trap and kill people and once you die, much like the Murder House, your spirit stays there forever. It is run by someone named “the Countess” who is played by Lady Gaga, is a form of a vampire. This “Countess” is based on a woman named Elizabeth Bathory, according to History.com,  through the 16th and 17th century killed almost hundreds of young girls, all in order to bathe in their blood because she believed their blood kept her young.

The character James March is the one who owns the hotel and created it as his own personal labyrinth in order to fulfill his murderous needs. The James March is based on Dr. H.H. Holmes, according to Biography.com, who was this serial killer of the 1980s, where it is believed he killed over 200 female victims. He created the hotel in the way where doors could lead to your death in many different ways, one could be a trapped door you could fall down, or even fall into a doorway filled with swords.

One particular episode called “Devils’ Night” features the character James March hosting a dinner party with infamous serial killers. It features Aileen Wuornos, John Wayne Gacy, Jeffrey Dahmer, Richard “The Night Stalker” Ramirez, and The Zodiac Killer even one of the main characters hinting at if he is a serial killer or not.

The season follows characters and the actors who portrayed them on a show that when filming had weird disturbances and revisit the house to see what actually happens when more strange occurrences. It is based on a Virginia colony you probably have learned in history class where a group of 117 English settlers vanished overnight without a trace and the only thing left was a word carved into a tree “Croatoan.” The colony was found abandoned in 1590.

The season goes into one character trying to take control over their government by drawing inspiration from previous cult leaders like Charles Manson, David Koresh, and Jom Jones Murphy.

In one of the episodes, we get a glimpse into the girl who attempted to kill Andy Warhol and wrote a manifesto urging women to kill off the male species. Her name was Valeris Solanas according to Biography.com, she was abused and sexually assaulted by her father which led to all of this pent-up anger that began to surface later in her life. Taking her anger out on the wrong people, getting into the artist’s lifestyle, and exploring her sexuality.

The eighth installment of the series follows a group of camp counselors who succumb to a whirlwind of twists where a serial killer by the name of “Jingles” is hunting them down along with a known serial killer, The Night Stalker. The Night Stalker is also mentioned in the hotel season but you see more of his backstory.

The TV series always draws inspiration from real-life events and people to show you the horrors American has faced throughout the years. What will they show you next? The ninth season is set to come out around Halloween of 2021, being renewed for the 11th, 12th, and even 13th season. There have been theories of what the season is going to be about, but the show has confirmed that is something that no one has guessed right.