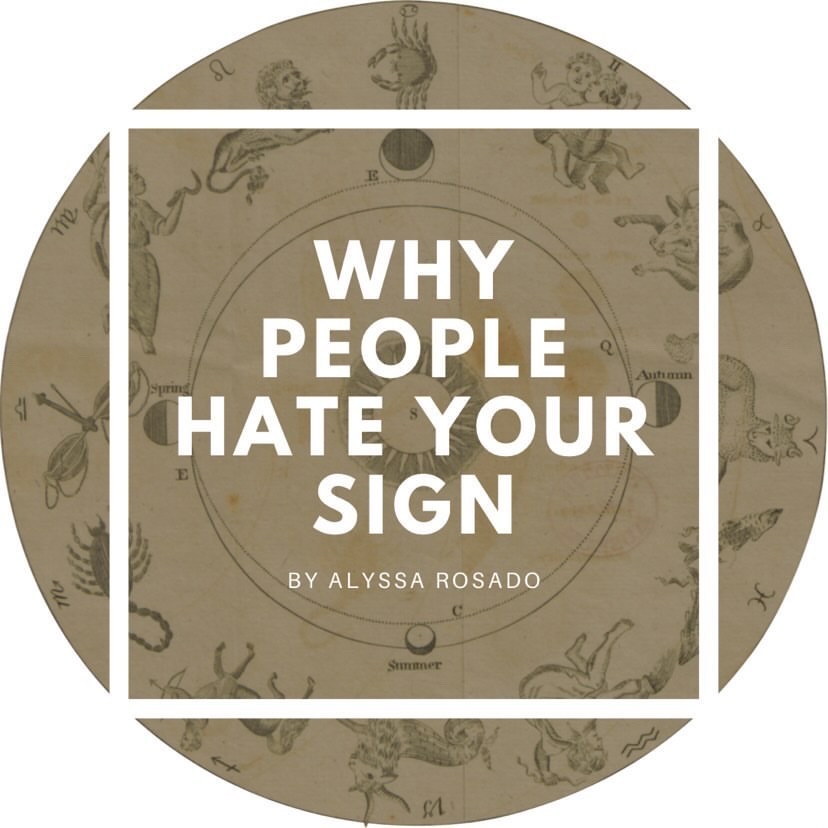 You’ve probably overheard, or even had conversations yourself, about astrology once in your life. They typically start out by asking what sign the other person is and somehow end in a tangent on how they hate that sign. It’s an unhealthy way to discuss the signs because it imposes stereotypes and always portrays them in a negative light. Many times many people have one negative experience with one type of sign and they denounce every person who is that sign. This can be quite annoying because not everyone with the same Sun sign is the same.

Although every sign has their fair share of being hated by a large group, there are a few signs that take the heat more than others. These signs tend to be universally disliked by everyone, regardless of the individual’s sign and are said to be bad friends or partners. Gemini, Scorpio, Aries and Virgo tend to be the signs people are most wary of even before initially meeting due to hearing negative stereotypes and stories from others. However, many people may actually get along with these signs but won’t give them a fair chance because of the fear, myths and stereotypes that are fed to them.

Geminis are always labeled as being two-faced and noncommittal, which are two things no one wants in a friendship or relationship. Geminis get this bad reputation because they are an Air sign. Air signs in general are not very committed people, they love to explore their options in life and move freely. The way Geminis and all Air signs move is similar to how air moves. You cannot contain air or hold air down. Air is constantly moving, even when it is contained in a balloon. Geminis are known for being extremely social people who thrive off of communicating with others, being in new environments and taking up new hobbies. When people express that Geminis are two-faced, they are really seeing Gemini adapt to new surroundings rather quickly. Geminis are also a Mutable sign, which means change does not phase them as heavily as it does others.

Scorpios get the label of being obsessive, secretive and just plain evil. All three of these traits are not ideal in any relationship and steer people away from Scorpios. This sign is a Fixed, Water sign meaning they are determined people who are grounded in their viewpoints, goals and morals. However, also being a Water sign means they flow easily with others because they tend to find an emotional connection first. They tend to be more passionate and intense during conversations with those they are comfortable with because it is how they connect and feel safe with others. If they are talking to people they do not know that well, they tend to be more reserved, or closed off, which is why people tend to think they are extremely secretive. Their need to get to know people on a deeper level is what drives people away from them because not everyone wants to disclose personal information. Scorpios get labeled as evil because they are known to have no remorse for people who betray their trust and will most likely ghost you if you do. When you hear someone saying they hate Scorpios, it’s really them not being able to match the intensity level of a Scorpio.

Aries, the first sign of the zodiac, gets a lot of heat for being the first sign and for being a Cardinal Fire sign. Aries’ stereotype is that they are explosive and impatient. This combination scares people off. Aries tend to have an explosive nature due to being short-tempered because they are used to doing things for themselves. They are very independent people and rather get things done for themselves so they know it is exactly how they like it. However, not every Aries shows this explosive behavior in the same way, which is where some people tend to overlook it. Many Aries will show this frustration by talking things out with someone until something is completely solved. They won’t let themselves or the other parties involved go to bed or leave the situation mad or hurt. This is where the impatient part comes in because Aries are not willing to wait things out to cool off. They rather deal with problems as they come and work things out as fast as possible. Some people may not enjoy this because they need that time to cool off or collect their thoughts. Aries is also a Cardinal sign, meaning they are natural-born leaders and like to initiate change. With all of these traits and qualities together, this can sometimes make Aries seem a bit intimidating, but they just want the best for all parties involved.

Virgos are a Mutable Earth sign that is often stereotyped as uptight and overly critical. This makes Virgos sound like they suck the life out of everything. However, since they are a mutable sign, they do quite the opposite. Mutable signs, like Virgo, are excellent at communicating their feelings and analyzing others’ feelings because of how observant they are. Additionally, being an Earth sign means Virgos like to hold things down and keep it real. They do not like to have a hazy or dream-like view of the future or the present because they enjoy structure. They like to see and call things out for what they really are to help them gain a better understanding of the world around them.

Next time you find yourself in a conversation where one person is incessantly hating on a sign, think of the qualities and elements of that sign and how people overlook them. Discovering different traits in people through their Sun sign is what makes astrology so fun and unique. By believing these easily spread and adverse myths, you are becoming a part of the bandwagon of hate. Learn to understand people more than just surface level and you might just find your next best friend being a Gemini, Scorpio, Aries or Virgo!