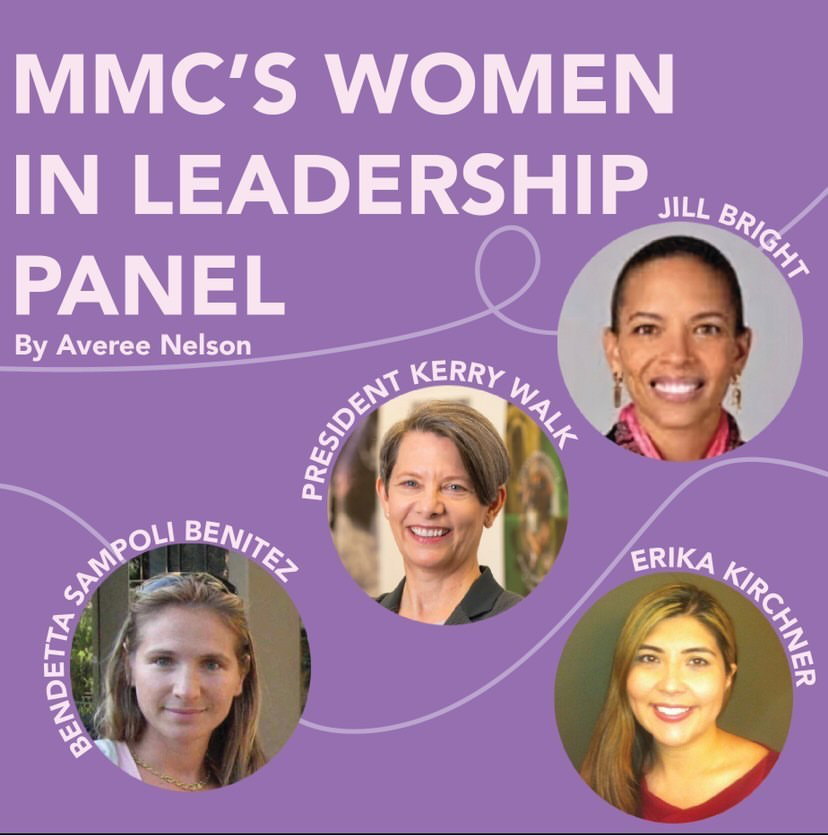 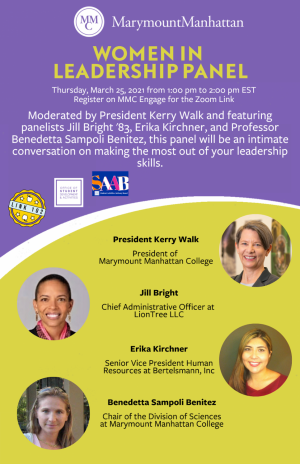 Every March, the United States recognizes the achievements and contributions women have made to our society, culture and overall history that have often remained invisible to the mainstream narrative of our history. 2021 has been a turning point in women’s history and the women’s suffrage movement. Looking back to the early women suffragists fighting for the simple ability to exercise the right to vote in the late 19th and early 20th centuries, some would say it is long overdue to finally see Kamala Harris be sworn in as the first woman Vice President of the United States.

At the tail end of Women’s History month, Marymount Manhattan College hosted a Women in Leadership Panel, moderated by MMC’s President, Dr. Kerry Walk. Opening the discussion to a Zoom call of over 100 eager zoom box participants, President Walk made the astonishing point that only 32% of colleges have presidents who identify as women. There is an even smaller percentage of those women presidents who are openly a part of the LGBTQ+ community.

In a college as small as Marymount Manhattan College, it is crucial to have open discussions about inclusivity and diversity. Even though approximately 80% of MMC’s enrolled students in the Fall of 2020 identify as female, there are still absent conversations from our quotidian routines. The key takeaway of this panel is that women have come so far in making strides toward gender equality, but there is still work to be done.

Led by President Walk, the panelists consisted of Jill Bright, Erika Kirchner and Professor Benedetta Sampoli Benitez. Bright is an alumna of MMC’s class of ‘84, as well as the Chief Administrative Officer at the global investment and merchant bank LionTree LLC, with over 25 years of experience working in senior executive roles such as Conde Nast and American Express. Kirchner is the Senior Vice President of Human Resources at the publishing company Bertelsmann, Inc. located in New York, NY, with a background in strategic leadership positions across the field of Human Resources. Professor Sampoli Benitez is the Chair of the Division of Sciences at Marymount Manhattan College and previously worked as a research fellow at Memorial Sloan Kettering Cancer Center. All three panelists have leadership skills across a vast spectrum, and they offered encouraging advice to combat the gender divide in the future careers of MMC students.

The conversation began with the question of if any of the panelists imagined themselves to work their way into the positions of leadership that they hold today. Professor Sampoli Benitez was the first to unmute and explained that she never actually thought that she would be in a position of leadership, especially as the Chair of the Science Department. However, she was able to see that it was possible at Marymount because her predecessor was a woman. Professor Sampoli Benitez admitted that it was difficult to be heard when she first stepped into the position, but she has adapted into her role as an “advocate” for her students and her colleagues.

Science is a department that requires collaboration and a playing field where everyone is working together. Professor Sampoli Benitez speaks on this aspect of her division, saying that she has never seen herself as above her students in the lab or when researching. She values sharing her visions with her students and colleagues, as well as listening to everyone and making changes to her plans when others suggest them.

Erika Kirchner also admitted that she never saw herself to be in a position of leadership and this feeling has been rooted in gender-based stereotypes. It is not uncommon for women in the workplace to hear the stereotype that they are “bossy” when they are in command or that they aren’t friendly when they are leading a team. Kirchner sees it as more valuable to negate the stereotype of women being “bossy” leaders and replacing it with “collaborative.” These generalizations are harmful when women hold executive positions in companies because it dismisses qualifications and experience.

Jill Bright views “leadership [as] curating followership.” Bright elucidates this point by explaining that women have begun defining their positions through “influencing.” It is better to champion and help others through influencing their actions rather than governing or demanding how they act in the workplace.

Rolling with this topic of “followership,” Kirchner added that followership is an important stepping stone to helping others manifest a common goal and work together to get to a higher level. Kirchner moves to the topic of students finding a mentor who will parallel the style of leadership they seek to reflect in their own careers. The quest to find a mentor is not always the easiest task but it is important to be aware of what leaderships you gravitate towards and to be able to find a mentor you feel comfortable with, Kirchner explained.

To Bright, “360-degree” leadership is the best method to be mindful of. According to HealthManagment.org, a 360-degree leader “involves identifying yourself as a leader who simultaneously influences people at every level of the organization.” Rather than looking down on others in the workplace, it is more efficient to work towards building a collaborative and empowered team of people that can work together and succeed together.

There was a moment in the talk where the panelists addressed that it takes a lot of hard work and dedication to be in positions of leadership, especially as women. President Walk posed the topic of imposter syndrome for the panelists to discuss in relation to their own careers. In the article: “Stop Telling Women They Have Imposter Syndrome,” by Ruchika Tulshyan and Jodi-Ann Burey, they define imposter syndrome as “doubting your abilities and feeling like a fraud at work, [which] is a diagnosis often given to women.” For far too long, high-achieving women, who hold high positions in companies and work day and night for their accomplishments, doubt the legitimacy of their achievements. Tulshyan and Burey point out that “Imposter syndrome took a fairly universal feeling of discomfort, second-guessing, and mild anxiety in the workplace and pathologized it, especially for women.” Typically, while men progress in their careers without this doubt and “second-guessing,” women are burdened with this syndrome of uncertainty in professional life being characterized and projected as normal.

Bright responded to the topic with the sad reality that women get questioned a lot by their male counterparts. However, it does not have to be the reality women face in the workplace if they look past these syndromes and stereotypes and instead focus on their qualifications. “It doesn’t matter how you look but [rather] if you are qualified,” Bright said.

Professor Sampoli Benitez explained that we need to move past the narrative that “Women have to be nice” or “likable.” It is a hindrance to women’s ability to succeed and craft meaningful “followerships.”

Closing the conversation, President Walk asked if any of the panelists had a final word of encouragement or advice for those in the call. “You have to be fearless about all your roles,” Bright said. No matter what role you are in – whether it be in work, as a partner, or as a parent – it is important to be unapologetic and confident when fulfilling these roles. Professor Sampoli Benitez said: “Put your best foot forward, don’t be discouraged, and embrace the vision of being a future leader.” Despite all the struggles women face as leaders, it is not impossible to succeed and the opportunity is never too far away to grasp.

As the event time came to an end, audience members filled the chat with celebratory thanks and left the call with newfound enlightenment to face the world with fierceness and confidence. While waving goodbye and thanking the panelists for their words of wisdom, President Walk offered a cheerful and empowering salute to those next in line for roles in leadership, exclaiming “Lead on!”