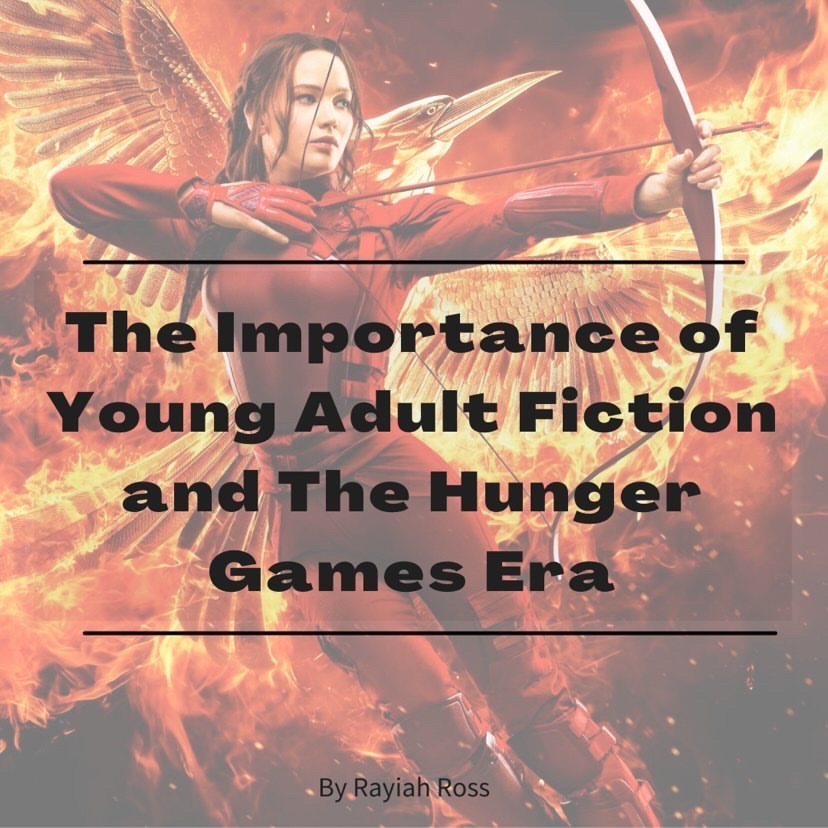 *Includes commentary about each movie, so spoiler warning if you’ve never seen them… But if you haven’t seen them, go watch them right now! This article will still be here when you’re done.

The early 2010’s film industry was dominated by adaptations of young adult dystopian fiction. Some of the most popular movies out were The Hunger Games (2012), The Maze Runner (2014), and Divergent (2014) and even more recently, The 5th Wave (2016) and Ready Player One (2018). Despite the fact that young adult dystopian stories attracted massive audiences worldwide, YA fails to be taken seriously in a literary sense.

The rise and fall of dystopian YA fiction has much to do with the fact that producers relied on the assumption that young people are mindless consumers. Within both the books and the film, most plotlines followed the same few tropes and failed to evolve.

It wasn’t until the release of Harry Potter and the Deathly Hallows that it was revealed that the books as large as the Harry Potter franchise were profitable amongst children. The seven-book, 4,125-page series has sold over 48 million copies in the United States and over 400 million copies worldwide since the first book, “Harry Potter and the Sorcerer’s Stone,” was published in London in 1997 and has been translated into 67 different languages.

This topic has been discussed before in The Cultural Impact of Twilight. Twilight was marketed primarily towards young and impressionable young women.  Twilight was the first real YA adaptation that proved young female audiences are a profitable market despite going against the usual princess culture used in films. The main character was known as an awkward teen and she often put herself in danger to save the people that she cared about and not the other way around. This set the standard for other film adaptations like The Hunger Games (2012), The Mortal Instruments (2013) and Divergent (2014) that rode the wave that Twilight created.

In an article by Alexander Pan,  Divergent is blamed for the downfall of the genre. He claims that the series “killed YA Dystopian adaptations for good” with the subsequent release of Allegiant (2016) only further highlighting the problems within a genre and the overdone tropes.

The most common tropes and formats of these stories were the chosen one plotline, the love triangle, The lack of adults and a happily ever after. The Hunger Games Era specifically was one that followed (and eventually demolished) every trope in the book, but still managed to be the 21st-highest-grossing film franchise of all time, having grossed over $2.97 billion worldwide.

This Hunger Games never shied away from social or political issues, but the chosen one plotline was never intentional. Typically, the chosen one protagonist who questions the existing social hierarchy and eventually becomes the rebel. Katniss Everdeen was never the chosen one. She was ultimately very reluctant to become a symbol for a revolution and she was manipulated into the role.

The love triangle plot line typically distracts the audience from the storyline or creates a new one in general to give the audience a break from all the action. In The Hunger Games, this trope is used strategically. Ironically, the love triangle in The Hunger Games was meant to distract audiences from the powerful messages within the story. In this world with such an unjust and cruel government, the romantic aspect is supposed to be this spectacle that tries to distract you from this war-ravaged world.

Parental figures weren’t necessarily important in the film, but the supportive cast of adults was majorly important to the survival of the main characters. Last but not least, the idea of a happily ever after is awfully bittersweet in The Hunger Games.

By the end of the story/films, you learn that there are very few heroes in the story at all and not every decision made by the main characters were the correct ones. That’s where the true beauty of the story lies, in the fact that the characters are flawed and true to themselves.

The problem is, because there was such a large amount of YA dystopian films and books that came out at the same time and they weren’t necessarily taken seriously, some people have failed to give them the time of day. Najla Alexander, for example, a student at Marymount Manhattan College has never seen any of the films or read any of the books in their prime. Now, over 10 years later from the release of the first book, she has decided to give them a try and share her thoughts.

Q: Why did you not watch The Hunger Games sooner?

A: As a kid growing up I loved reading books, specifically dystopian based novels. The ones where a young chosen hero brings the downfall of a corrupt government ushering in a better society where everyone is equal and accepted for who they are. Diving into a world not much different from my own reality, but being able to escape my reality to live their adventures.

The Hunger Games series was one of the first of  many YA series that shaped a generation. Although, hearing about its popularity and the strong story behind a young woman who volunteered in place for younger sister to save her life that led her to overthrowing a dictator posing as a savior. I was reluctant to read the books and watch the movies. Something about this series made me steer away from it and I never knew why. I believe now, thinking back to those years seeing how closely the series resembled our current reality stirred something in my stomach in a way that didn’t sit right with me. That feeling kept me from reading the books and watching all the movies. I didn’t want to watch or hear about something that made me face the true horrors of my reality even more.

Being a young black woman in America where you are constantly oppressed in any shape and form. Then seeing how a certain class of people in The Hunger Games are treated because they are in the “lower districts” compared to the “higher districts” made me distance myself.

Q: What did you learn from The Hunger Games?

A: One thing I did pick up when I remembered watching the first movie was how fabulous everything and everyone looked so to speak when they were preparing the tributes. That all these higher class people indulged themselves in these materialistic things, getting pumped up for the games so much. Forgetting how much death and carnage is involved because it’s for the good of the people. Becoming numb to the fact that their so-called President Snow is anything but a savior. Not waking up to how wrong all of this actually is.

One thing like many YA novels tend to focus on is a love triangle they throw in there to distract you from the real issue at hand. In life or death situations there always seem to be time for a romance, for people to share a kiss, or even among other things. When they should be worrying about surviving, but then who would see a movie like that.

Another thing I caught was that President Snow, when displeased even with his closest henchman, will “kill them” in a way that still has no connection to them all because he chose to have two victors instead of one. A government that will go to any length to keep its claws deep into a society where they only care about  themselves and not let a society think for themselves.

Q: What did you learn from Catching Fire?

A: How this government plans to manipulate and distract the public from what is really going on just reminds me what is happening in our very own society. Where there are things to distract you; keep you “asleep” from what is actually going on and need to know. So, that we can never know the truth and wake up to what is going on around us. Injustice. In every shape and form.

Q: What did you learn from Mockingjay pt 1? Are there any parallels to real life?

A: The most powerful message throughout these movies I think that relates to much of what happened in 2019 with the BLM movement and former President Trump is when she said “If you think for once second that the Capitol will ever treat us fairly you are lying to yourselves. Because we know who they are and what they do. This is what they do and we must fight back! I have a message for President Snow. You can torture us and bomb us and burn our districts to the ground. But do you see that? Fire is catching and if we burn, you burn with us!” One that will always resonate with me and many other people. Along with the hanging tree song.

All it takes is one person to rise up, the rest will follow and that’s when they will get scared, scared of what all of these minds put together can accomplish.

Q:What did you learn from Mockingjay pt 2? Any Final thoughts on the overall franchise?

A: One thing Katniss made me think about how the Capitol makes you kill each other, without getting their hands dirty. Making everyone be distracted from the real issue; the real enemy. President Snow. All that time present fighting one another instead of realizing who is making them fight in the first place, the one controlling the game and making their own rules.

Gale is annoying and even President Coin a little bit. Right now it seems like she could turn into a dictator, she is seeming more and more suspicious to me. I don’t know if it’s because she wears unconvincing contact lenses all the time, but something about her I don’t trust right now. Does everyone need to have a personal agenda no matter what, there just can’t be a common understanding of peace. Why does one person need to be better than the other or considered lower?

My biggest takeaway was actually such a small detail: the movie covers. Katniss changes from cover to cover, almost like she is being reborn again. Born into someone who is meant to be something bigger and bring about change. Someone who knows what they stand for and what they believe in without having the fear of letting an outside force control her anymore.

Finally, a (sorta) happy ending. I know now that I should not have put these movies off, but like I said before they hit way too close to home. I am glad I have finished these movies, it was another world I could escape to.

The Hunger Games had a large impact on political and social commentary in contemporary young adult fiction. Even now, plenty of YA novels and films like Love, Simon, To All the Boys I’ve Loved Before and The Hate U Give are all heavily political. In a survey issued by Scholastic, the 2010 Kids & Family Reading Report, found that 43 percent of the children ages 9-11 believe the most important outcome of reading books for fun is to open up the imagination. 62 percent of the same demographic say they read books for fun “to be inspired by storylines and characters.”

The fact is, books like The Hunger Games, Divergent and The Maze Runner were such large parts of our childhood and they have influenced us without us even really knowing. In an interview with Pew Research Center Executive Vice President Paul Taylor, he went on to say that something “very profound has happened.” The current youth is coming of age with a very pro-government, pro-Obama mindset.