The Whiteness of True Crime 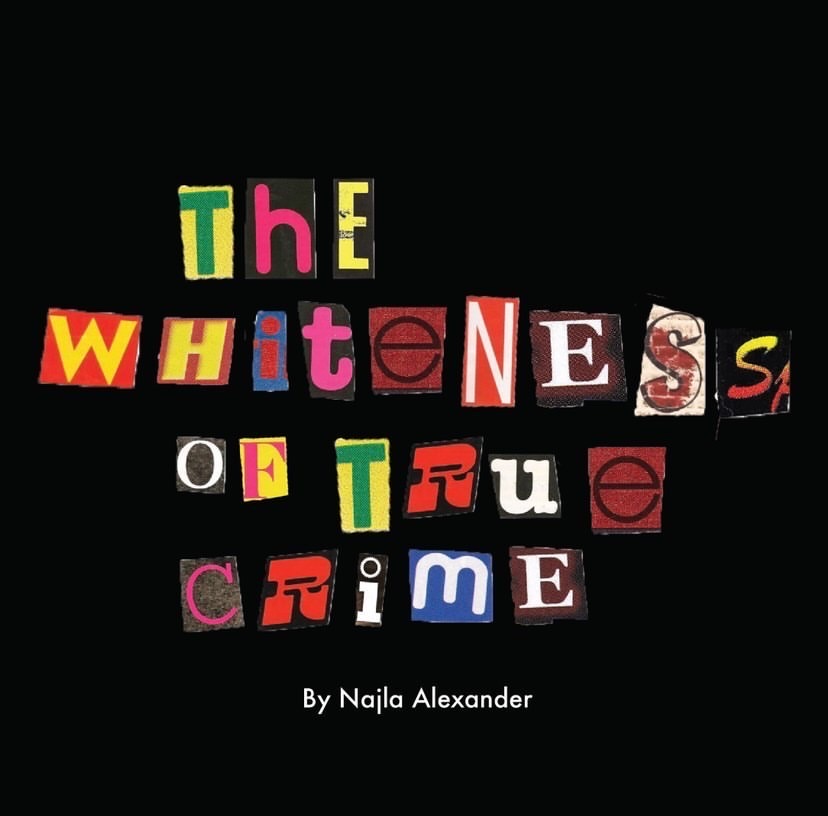 True Crime is a genre loved by many.  Spanning from documentaries to podcasts to novels and TV shows, the True Crime genre showcases the overly motivated investigator and the family who didn’t want their case to go cold and forgotten about like others before them. White victims and voices dominate this genre. Whether it is on-screen or in a novel, it is skewing the public eye to believe misconceptions about the Black community that directly impacts it. Misconceptions like there being no black serial killers or even that they are extremely rare so they are not worth the media attention.

White, True Crime authors are telling the readers about a crime that almost always directly affects Black people. Painting an untrue picture of what crime is actually like and who actually commits those crimes. Taking away media attention from Black/POC communities they are being affected by crime, but nothing truly being done. True crime portrays the most common murder victim as a woman being killed by a man.  This perpetuates another gender stereotype that men are aggressive by nature and females are passive. “In fact, approximately 17 percent of all serial homicides in the U.S. are committed by women. Interestingly, only 10 percent of total murders in the U.S. are committed by women,” according to Scientific American. Meaning women are not always the victim and men are not always the killer. It is just less common for a woman to be a killer compared to a man.

Gar Anthony Haywood, the Shamus and Anthony award-winning author of 12 crime novels, believes “It’s not an ‘audience’ problem. Too many editors and publishers have a misguided perception that the market will only bear a small number of books featuring non-white characters—a theory that’s never been adequately tested, let alone proven.” POC crime writers like Mr. Haywood believe that many editors and publishers contribute to the problem of not allowing for POC crime writers to be put out on the market as much as white crime writers.

The genre of True Crime needs to expand its horizons to the point where it’s unrecognizable, in a good way. I use the word “unrecognizable” because it should not only be told from a point of view where the only crimes that are being told are ones that only affect white communities. Where the same old narrative is being told, written, and investigated by white authors and investigators.

Samuel Little is the most “prolific” serial killer in U.S. history according to the F.B.I.  Where many did not know his name or even know about the crimes he committed. Mr. Little, an African-American man confessed to murdering 93 victims most of which were Black Women. He has been matched to 50 more cases that are pending confirmation. To many people’s surprise, even my own, there are more Black serial killers out there than we realize. This wrongful assumption made many believe there wasn’t any out there. Black and POC assailants need to be more represented equally in the media for the fact that serial killers can range across all different racial and ethnic groups in the U.S. According to Scientific American, “There are well-documented cases of African-American, Latino, and Asian-American serial killers. African-Americans comprise the largest racial minority group among serial killers, representing approximately 20 percent of the total. Significantly, however, only white, and normally male, serial killers such as Ted Bundy become popular culture icons.”

A racial disparity that seems to go unnoticed is that dominantly white investigators and white victims are all an audience will care about.  In accordance with the 2019 Diversity Baseline Results, “According to the survey, 76 percent of publishing staff, review journal staff, and literary agents are White. The rest are comprised of people who self-report as Asian/Native Hawaiian/Pacific Islander (7 percent); Hispanic/Latino/Mexican (6 percent); Black/African American (5 percent); and biracial/multiracial (3 percent). Native Americans and Middle Easterners each comprise less than 1 percent of publishing staff.” A noticeable absence of POC investigators solving POC cases in reality and in novels. “Just over half of NYPD officers are white (51%), 27% are Hispanic, 15% are Black, 7% are Asian and less than 1% are American Indian,” in accordance with NYC  Data Transparency Initiative, the amount of Black/POC officers is till staggering low.

These POC investigators are not given the chance to do their job for their community because their cases are not gaining enough recognition/media attention to get financially supported to be on screen like the rest of the “popular” true crime documentaries. Due to not being appealing enough to the presumed prominently white-dominant audience.

POC authors’ stories need to be out there kicking down the barriers of myths the media has played a part in. Over time eradicating the stereotypes that there are no black serial killers and putting out accurate crime-based novels that impact those communities. Seeing POC investigators working on cases that directly impact those communities, making some sort of change day by day. Receiving the media attention and recognition it deserves to be put on screen with the rest of the true-crime documentaries. Most importantly being diverse. Diverse in a way where the typical “white” narrative is not always the story they run with first. Instead, go with the story where it involved POC and their families being investigated by a POC and written by a POC. Forcing the media to pay attention and show to the world that the genre of True Crime in all aspects is not predominantly white anymore and never should have been.