Everything Wrong With Netflix’s “Insatiable” (…There’s A Lot.) 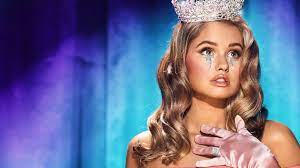 Multiple shows created, produced or endorsed by Netflix in the past few years have been excellent champions for diversity, and beacons of hope in a society where, despite some improvement in recent years, Hollywood continues to churn out films and television shows with the same white, thin, straight protagonists. Despite the progress that Netflix has pioneered, the streaming platform doesn’t have a squeaky clean record with its films and television shows. The series 13 Reasons Why and the film To The Bone often come to mind when discussing controversial Netflix releases. However, the worst of all may be its new series, Insatiable.

Insatiable follows the story of a high school girl named Patty who, at the beginning of the story, is overweight. Debby Ryan plays the character in a very unrealistic fat suit that looks less like an average overweight individual and more like someone with pillows stuffed under their shirt, and a very exaggerated prosthetic double chin. Right off the bat, any viewer that has dealt with the stigma surrounding weight can immediately feel uncomfortable at the sight of Patty, as many plus-sized individuals would concede: fat suits in film and television have rarely served any other purpose than to be a tasteless joke. At the very first glance, Insatiable is already pushing limits.

While Patty eats a chocolate bar outside of a gas station, a homeless man approaches her and tries to take her chocolate bar. He makes a comment about her weight and, in her anger, she punches him in the face. He punches her back, breaking her jaw and leaving her unable to eat solid foods for several months in her recovery. This is how she loses the weight that will frequently be looked back on negatively throughout the series; as some sort of burden that held her back from succeeding or being happy or feeling beautiful, all (as the plot suggests) because of the bullying she endured for it in high school.

Insatiable gives its readers whiplash, to say the least, regarding body positivity. In some rare, hardly redeeming moments, Patty will reclaim her strength, such as in the first episode’s court scene when she delivers the line: “You’re telling every overweight teenager in America to just shut up and take it,” in reference to the harassment and bullying she endured for her size. If these statements, these singular, shining moments of empowerment, were the true premise of the show, maybe it would be a wonderful comeback story of a bullying victim finding her strength and fighting back. Unfortunately, the majority of the time, the show depicts Patty as finding her strength in her newfound “beauty,” and on several occasions even describes her fear of losing that and being “Fatty Patty” once again.

The show frequently asserts, whether in a satirical matter or not, that Patty was treated better and regarded in a much more positive light after losing weight. Her lawyer and beauty pageant coach Bob explains to her in the first episode that she has the potential to be a role model for overweight girls by showing them “what’s possible.” He later says that she can be an “it gets better story,” implying that losing weight was what made her life better – rather than improving her life and self-image learning to accept herself and find her own strength and confidence outside of the stigma that once faces being overweight. The main message is clear: in order to be an “inspiration” to other overweight girls in America, Patty must cease being overweight and change herself and her body to fit the classic beauty standard, instead of, perhaps, trying to advocate for change in the societal disdain towards being overweight.

Bob even says to Patty in a completely serious tone – no traces of satirical or comedic intention – that “skinny is magic.” This idea is continually pushed throughout the series, that there is strength and power found in achieving conventional beauty, rather than working on curating beauty within through personal development and integrity. With any audience, but especially the young, vulnerable teenagers that this show is seemingly marketed towards, this feeds the incredibly toxic, dangerous idea that the only solution to your struggles in life is to lose weight, to become “skinny.” It also adds a nice layer of misogyny on top, blatantly suggesting that a woman’s worth can only be proven through her appearance, and she can only find power in being “pretty.”

Patty’s former condition of being overweight is constantly represented as a “control issue,” her “insatiable” need to keep eating. Later on, this “control issue” translates into her “insatiable” need for revenge, which results in her regularly committing crimes until (spoiler alert!) she eventually murders someone. In reality, through the lens of basic psychology, if Patty did struggle with “controlling” her food intake, then this wouldn’t be a behavioral problem, but an actual disorder – binge eating disorder – one that is already shrouded in enough stigma and shame. This particular struggle of Patty’s is something that could’ve been treated as an opportunity to educate and inspire hope in those struggling with binge eating, but was used to quite literally criminalize Patty instead.

The problematic themes regarding Patty’s weight, or the life changes that led her to lose weight, are far too many to even begin to address them all in this article. It seems that you can’t go five minutes without hearing a line about “fat people” that makes you cringe. The most frustrating thing about Insatiable is that the toxic messages about weight are only the tip of the iceberg. There’s homophobic and misogynistic themes sprinkled throughout the show as well, once again being passed off as raunchy comedy, but are we really at a point in society where we can laugh at these things, when there is still so much suffering because of them?

Patty’s best friend, Nonnie, discovers her sexuality throughout the series, but from the very first episode, it only functions as a punchline. She is depicted from the beginning as the lesbian that is “obsessed” with her best friend, constantly crossing lines with Patty in ways that are supposed to be comical, but hit far too close to home for any LGBTQ+ viewers that know all too well how real the fear of “creeping out” your straight friend of the same sex simply by being out of the closet is. In the first episode, she states “We should celebrate, make out!” then adds “with guys…not each other,” and says “Did you guys kiss? Because maybe we should,” in another episode, both clear attempts by the show to depict her as predatory and weird, but in a funny way. I don’t think anyone in the LGBTQ+ community is laughing.

The show has a frequent running joke about Patty’s lawyer and pageant coach being falsely accused of molesting an underage woman….and Patty also happens to have a crush on him. There’s an entire storyline regarding that and the uncomfortable sexual tension between him and a “barely legal” Patty. In the age of #MeToo, it seems like the most offensively, horrifically inappropriate time to make light of the subject of sexual abuse, and additionally, it’s just plainly never a good time to idealize and romanticize relationships between a minor and an adult, or, in Patty’s case, a teenager in a vulnerable position and the adult with all the power. There’s also one scene where one of Patty’s underage classmates, Brock, has sex with another character’s mother…which is statutory rape, end of story.

Overall, Insatiable had countless opportunities to take this show and make it a truly triumphant tale of an overweight girl finding her strength and confidence, and learning that “success is the best revenge,” but it became clear in the first episode alone that this was not the path this show would take. When its messages and “jokes” aren’t outrageously toxic and damaging, they’re trashy at best, and watching this show as someone who has struggled with so many of the themes in it leaves a weight on my chest that I may never shake; a painful reminder of just how overweight people, LGBTQ+ people, victims of sexual abuse, and countless other marginalized identities that were exploited for the sake of a cheap laugh in this show, are viewed by some members of society…and just how much work we have to do in order to come close to making the world a better place for them.