Would you Dare to say His Name, If you knew their Story? 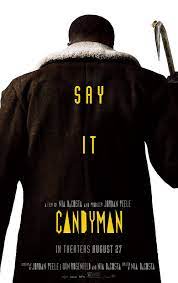 *Spoilers ahead if you haven’t watched the film yet*

Candyman (2021) is a supernatural slasher film about a spirit with a hook for hand covered in bees that can get summoned by saying his name five times in the mirror and whoever summons him always ends up dying. Written by Jordan Peele and directed by Nia DaCosta, it is the direct sequel to the original 1992 film. The film takes place 27 years after the original film focusing on a couple, Anthony McCoy (Yahya Abdul-Mateen II) who is an artist trying to find his next inspiration, and Brianna Cartwright (Teyonah Parris) who is an art gallery director in Chicago. Brianna’s brother tells them the horrifying story surrounding the Cabrini Green-Housing project about a woman who tried to sacrifice a baby in the bonfire, but before she could do it the community stopped her and she proceeded to walk into the fire ultimately killing herself. Upon hearing this story Anothony thought this would be his new inspiration for his art piece and decided to uncover more about the Cabrini Green-Housing Project. Diving into a past that not only changed his life but also his girlfriend’s forever.

He comes to realize that the baby who was going to be sacrificed by the woman was him. The woman who got possessed was originally there to write her thesis about urban legends and the legend about the infamous “Candyman” and she went into a world she truly didn’t understand that ended up getting her killed. The story that drew her into the Cabrini Green-Housing Project was based on a true story that shaped the films, an article written by Steve Bogira “They Came Through the Bathroom Wall.”  The story is one of many that came out of this particular housing project in Chicago, where the community saw violence skyrocket where there would be numerous calls being made to the Chicago P.D. almost every day. Calls of shootings, stabbings, and many dying at the hands of police, but little to nothing is done to help. The only help the community truly relied on was each other because the police that were supposed to be there to protect them never was. Resulting in death upon death which adds to the monstrosities shown in this movie because it is a reality to Balck communities. In accordance with the Washington Post, the Cabrini Green community during a three-month period once saw 11 murders happen.

“Candyman” possessed this woman, wanting her to kill the baby so the baby could come back as a vengeful spirit or another “Candyman.” Trying to create another “Candyman” to show society the death of Black men needs to stop. Diving back into this long history he begins to see visions of a man with a hook for a hand creating more and more inspiration for his art pieces that gained popularity when a murder happens at the art gallery. He slowly starts to become him and eventually all together becomes the new “Candyman” and a very powerful ending scene showed the actor Tony Todd who played the original “Candyman.” He stated, after killing the police who shot Anthony who was a clearly unarmed Black man in need of help who tried covering up his wrongful murder, he looked over the girlfriend who got free of the police, “Tell everyone.” Sending chills to anyone who truly understood what he meant. That last powerful statement made you think and realize that this vengeful spirit that comes back to kill people is a reminder not only for the Black community but for society. A message conveying that the Black community is tired of the death and pain they have to carry every single day and the time is now for it to stop.

This film gives some horrifying yet true insight into the generational trauma Black communities endure over the years with the white violence on Black men. The white violence against Black men is the main focus on why the spirit “Candyman” is a vengeful one. Throughout the movie, you see stories of how Black men are wrongly accused of crimes, hunted, and killed at the hands of white men. Causing this endless cycle of death and violence Black communities have come to know. The endless cycle creating this line of “Candymen” who come back as benevolent spirits as a way to make people understand the death in the Black community needs to stop and will do anything to make it stop even if that means summoning a spirit to get that message across.

The origin story behind “Candyman” is out of fiction where it is about a historical fictional figure, Daniel Robitaille, a wrongfully accused slave that fell in love with a white woman that angered the white community who then was hunted down, mutilated to the point where the cut his hand off with a rusty saw smeared honey on his hand so the bees would be all over the cut hand, and then finally lynched. Beginning the lineage of the first “Candyman” hence why he has a hook for his right hand and bees always near. Throughout the movie, you see a Black man who was known for giving out candy to children, and the whole neighborhood knew who was and knew he had good intentions. Then somehow a little white girl gets a piece of candy with a razor blade in it and the police automatically think it’s him. The police find out where he is because he startles a little boy alerting the police, which causes them to beat him to death. Coming to find out he was innocent and they killed another innocent Black man. Creating yet another “Candyman” through the death of innocent Black men at the hands of the police.

The story may be fiction but the history is so similar to the historical violence with slaves and the Black community like him have endured and have endured worse throughout history in America. Even today with the continuous police brutality and the Black Lives Matter Movement being born, makes you wonder what will truly be the breaking point for the Black community in America. In order to truly grasp the message and story from the 2021 film, it is advised you watch the original 1992 film first to better understand the history that is the “Candyman.”