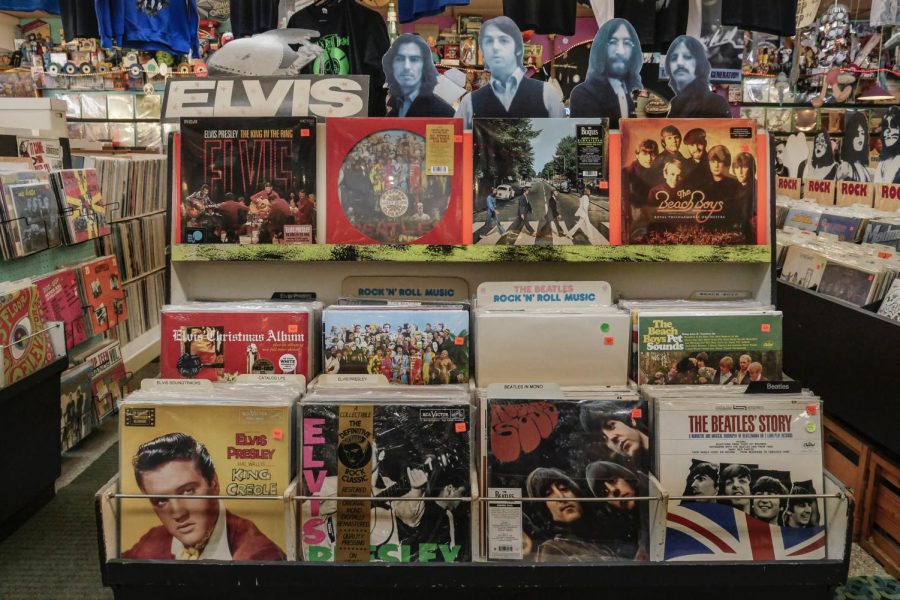 The new Elvis (2022) biopic hit the theatres on June 24th making over $130 million dollars at box offices over just a few weeks. Played by, heart-throb The Carrie Diaries star, Austin Butler, the film has fans of Elvis Presley (old and new) racing to see him once again on the big screen as one of history’s icons. Along, with reminiscing before reading further if you haven’t seen it for yourself check out this article and come back after you saw the film!

This musical film is directed by Baz Luhrmann who told Presley’s story of the highs and lows of the rock n’ roll lifestyle in such a time when many tried to silence the influence of jazz and blues in today’s culture. All from the perspective of his manager, Colonel Tom Parker, played by Tom Hanks who tries to convince the audience by the end of the movie he is not the villain but the victim in this story. The opening credits show Tom Parker waking up in a hospital raving about how the inevitable downfall of Elvis was not his fault by Elvis’ own doing following the story of his childhood to the rock n’ roll star where everybody knows his name, while important civil rights movement were happening around him. Including the assassination of Martin Luther King Jr. as well as Robert F. Kennedy.

Featuring significant and prominent Black artists such as Big Mama Thorton played by Shonka Dukerh (1977-2022), Little Richard, and B.B. King but the question most want to know was despite Elvis’s clear love of jazz and blues music was he a civil rights hero or a racist, and did this biopic accurately portray who he was?

Presley was born and raised in Tupelo, Mississippi where he attended the Assembly of God Chruch where deep tones of jazz and blues music all around him awoken something deep within him that set him on his path. All throughout his childhood, he was influenced by the Black gospel community feeling at home at places like Beale street feeling like he belonged there than in any other place in the world. As his name slowly starts to be brought up more and more for the likeness of his singing, gyrating hips, and dance moves of that to a Black artist, he gets noticed worldwide.

Elvis was indifferent to race and the laws that separated Blacks from whites in the name of segregation. Crediting his key success to Black artists and was one of many to break down a barrier when it came down to race, that we are all people. Despite that many, especially the Black community, still, see Elvis as a racist due to Presley popularising music produced by Black artists almost as a form of theft. Due to those Black artists not being credited for their work and never seeing any profits for it, Elvis made sure to always shoot down comments or rumors made about him saying racist statements. In accordance with Distractify, a rumor went around suggesting that he had said “the only thing Negroes can do for me is buy my records and shine my shoes,” when the rumor was proved untrue by a statement he made in an interview with  Jet Magazine where multiple testimonials from Black people, including Black artists, were made who knew him personally and knew he would never say anything like that. “Let’s face it,” Elvis said, “nobody can sing that kind of music like colored people. I can’t sing it like Fats Domino can. I know that.”  Even when fans started calling him the “King of Rock n’ Roll” he shot back that no one should be the king and that he was far from it and again credits his success to his many influences. When Robert F. Kennedy died on June 6, 1968, after being shot the previous day Elvis used his comeback TV special to sing “If I Can Dream” to bring awareness that this country is in crisis and it needs to change.

One inaccuracy in the film that stands out is that his new manager Colonel Tom Parker comes onto the scene, the film made it seem Elvis was put into jail for being Elvis “The Pelvis” Presley due to his dancing being too obscene for young white audiences and Parker wanting him to tone it down but that wasn’t the case. Tom Parker wanted all the publicity from Elvis even if Presley performing was causing riots he knew that would just bring in more money. Making a deal with the military to ship Elvis off to Germany in 1959 as a PR move to make it seem Elvis was an “All-American” young-white man who cared for his country, just another move to make more money off the Presley name, according to Yahoo News. There was when he met his future wife, Priscilla Presley who was 14 years old at the time while he was 24. Tom Parker noticed that despite homophobic comments being spit at him by the white male audience for looking and sounding not like your typical white artist in the 50s he didn’t let that stop him. Parker saw the way his aura and energy he brought to a crowd brought forth this new wave of excitement in white youth, especially the females, and immediately saw his new meal ticket.

Elvis was now known as the “King of Rock n’ Roll” so Tom Parker did everything in his power to keep him and that meant lying to him along with the loved ones around Elvis about what was really going on with his money. At the same time, Parker did his job well with how much work he put into promoting Elvis, but their relationship started out on a lie and continued until his death. In the film you see Elvis firing the Colonel on the Las Vegas stage but it happened in his hotel room after they argued when Parker would not let him out by essentially trapping him into being his manager by billing him millions of dollars over the years, claiming that’s what he owed him. Being that Parker was in charge of his finances and Presely hardly saw half of what he actually earned, he could not pay the bill and had to continue to let the Colonel be his manager. Beginning this downward spiral further into his drug addiction causing rifts in his personal life and career, ultimately leading to his death.

Colonel Tom Parker’s past didn’t come out until after Elvis’ tragic death. People always remembered Parker as the “All-American” show-business man but he was from it. In accordance with Smithsonian Magazine, Tom Parker’s name was Andreas van Kuijk, an illegal immigrant who was originally from the Netherlands. More details began to unravel soon after Elvis’ death in the 1980s and his family and friends soon discovered why Tom Parker never wanted to leave the states. Using excuses that it was never safe for Elvis to be traveling, even turning down million-dollar job offers around the world, but in reality, he was just trying to save himself.  “ Tom Parker had never held a U.S. passport and that while he had served in the U.S. Army, he had done so as a private…In 1932, he had gone absent without leave and served several months in military prison for desertion,” getting himself diagnosed as psychopathic to be properly discharged from the military and to further insure he never wnet back he gained over 300 pounds so he could never serve again.

The Colonel had a hand in Elvis’s affairs until the day he died from his finances to his relationships to even his acting career. Not until after Presley’s death a lawsuit was filed against Tom Parker for alleged fraud in his dealings with Presely when it was found out that he was taking about 50% of his earnings. Which is way more than the normal amount a manager should be taking, “claimed Parker negotiated side deals with RCA that defrauded Presley of $2.8 million,” according to UPI. He knew he had to settle because he was in the states illegally and once he did it came out to $2 million dollars in an out-of-court settlement for his unethical and extorinate misuse of managing Elvis’s career. Ultimately led to his death in 1997 from a stroke due to years and years of his declining health.

Elvis Presley was not a civil rights hero nor a racist just simply a white artist who simply profited off of Black artists’ music and made them popular due to his white privilege. Presley always made sure to not only acknowledge but thank the Black community for its musical culture. Appreciating how rock n’roll originated from jazz and blues, and just because he had the vocal abilities to sing like a Black artist he always noted that he would never be better than the Black artists themselves. The film did a phenomenal job of portraying not only Elvis’ backstory but the real and raw hurdles he went through with having a manager who only cared about keeping Presely working ultimately until his death for money. Not to mention a soundtrack that features a new take on “Hound Dog” featuring popular Black artist Doja Cat’s song “Vegas”. Shedding light not only on the positive but very much the negative of what it is like in the show business in the early 60s for someone with a mindset that was ahead of his time.