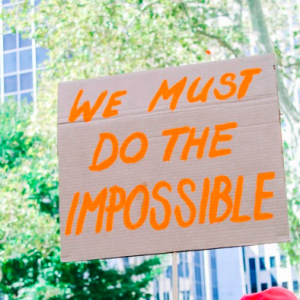 This photo is courtesy of The Monitor's photographer, Ana Coakley.

A massive crowd packed Manhattan’s Foley Square and its surrounding streets Friday afternoon, many holding signs and chanting phrases like “Stop denying, the Earth is dying!”This crowd, at a size estimated to be anywhere from 60,000-250,000, gathered as part of the Global Climate Strike, a worldwide protest movement inspired by the actions of Swedish sixteen-year-old Greta Thunberg, who began her own school strike for climate last year.

The New York strike was one of several similar events that took place all over the world, with protests in 163 countries, and on every continent. Overall, an estimated four million people attended these marches all over the world.

In New York, the crowds began to march in Lower Manhattan from Foley Square to Battery Park. Protestors of nearly every age group marched, carrying posters with statements like: “Our oceans are rising and so are we” and “We must do the impossible”.

One of the attendees interviewed, a young woman named Dora Blount held a sign expressing support for a Green New Deal, saying: “…I think that major government investment is needed to solve this problem and it’s not gonna be something that we can rely on the private sector to help us with…we need to transition our economy, and save our climate at the same time”. Blount was not the only one to express this opinion.  Another participant, sixty-four-year-old Hillary Exter expressed similarly, stating: “I think the Green New Deal offers tremendous promise. I think restructuring the economy around clean energy…jobs around clean energy really makes sense…”.

For many, the march was about awareness and solidarity with the many groups of people that will experience the most harm from the effects of climate change.  Matthew Johnson, a twenty-three year old attendee explained his reason for participating by saying that “I think it’s so crucial that people take this threat seriously..and center the most marginalized communities (that) are gonna be affected by this, like young people, indigenous communities, people of color…so I just think it’s really important to show up to stuff like this.” Mr. Johnson attended with a friend, 22-year-old Darcy Hinck, who expressed that “…people just need to physically put their bodies in places like this to show (the) administration where the people stand..” Ms. Exter also stated that she was there “…In support of young people who are out here to oppose climate change. I feel like it’s really courageous for people to be taking time off of school, and their lives, and I feel like we’re in a really intense crisis situation, and without drastic action, we’re all gonna be screwed.” One young man, appearing to be around high school age, held a sign reading “We are skipping our lessons to teach you one.”

To many in attendance, there was a pervading sense that the issue of climate change is a very serious threat that the government is not doing enough about. A middle-aged man attending the march with his daughter Amelia explained  that the sign his daughter made, with the words “I stand for what I stand on” is about how “We won’t have much to stand on if we don’t take care of our planet.” he continued: “We are here because we don’t think our government is doing enough in terms of legislation around climate action.”

Around 1:45 PM, the crowd at Foley Square began the march to Battery Park, chanting along the way. In stores with windows facing the street, more protesters held signs and cheered on marchers.

The march concluded with a rally at Battery Park, where Greta Thunberg delivered an address to the crowd, and those watching saying that: .

Many hope that the sheer volume of attendees at climate strikes around the world encourage world leaders to act on September 23rd when the United Nations will meet for a summit on climate change.