Is Graffiti Vandalism or Freedom of Expression? 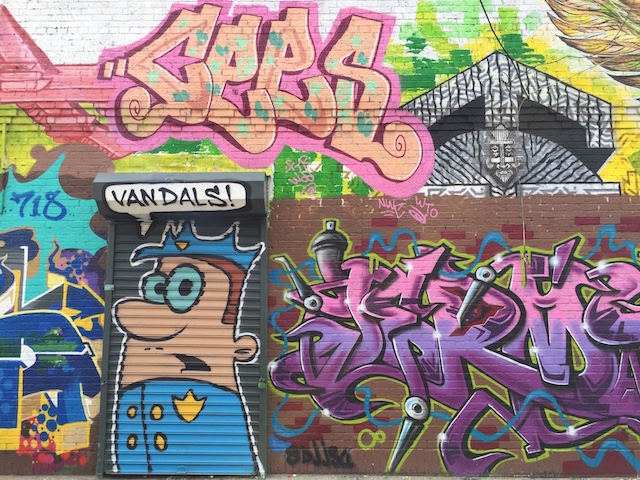 Graffiti is an artistic concept that is constantly being scrutinized by neighborhoods and businesses. While many people consider it vandalism by law, others consider it a form of artistic expression and art. From a legal standpoint, the only distinction between street art and graffiti is permission. With permission granted to the artist, painted graffiti is (for the most part) considered public art.

While most people view graffiti as simple tagging through symbols and intricate lettering (the more territorial components of graffiti), there are many other forms of nondestructive graffiti. Many artists have expanded their art to video installations, stencils, yarn bombings, and video projections. The artists sometimes illustrate their emotions and stories through their art. Sometimes this art functions as a code for other artists, while other times it is an outward piece for the public to understand. In recent years, more street art is changing individuals’ perceptions of the concept because of its normality. Art such as murals and mosaics have been around for centuries, typically covering entire walls. These viral forms of art are taking over urban settings around the world. For example, Banksy (an anonymous street artist and political activist) did an installation of his Better Out Than In project around Manhattan, New York in 2013. He used his dark humor to aid in social and political commentary on streets, walls, and bridges.

This complex boundary between art and vandalism has been challenged by many people, but not many have been as successful as American photographer and videographer, Henry Chalfant. He is most notable for his work on graffiti, breakdance, and hip hop culture. One of Chalfant’s prints, City as Canvas: Graffiti Art From the Martin Wong Collection, is held in the collection of the Metropolitan Museum of Art in New York City. In addition to galleries and museums in the United States, his work can also be found in Europe and Asia. Most recently, Henry Chalfant: Art Vs. Transit 1977-1987 will be on view at the Bronx Museum from now until March 8, 2020. Many of Chalfant’s photos in the exhibit, show teenagers being creative on the streets, on the walls of abandoned buildings, and train platforms. “A lot of trains were painted by groups of kids, the social life of the graffiti writers was to belong to a crew,” Chalfant told Artsy in an interview.

While buildings were burning in the Bronx in the 1970s, consumed by discriminatory practices and neglect, residents of the borough were rebuilding and creating. In the 1970s, the borough saw the rise of graffiti art, as young Bronxites used the city’s streets and subway cars as their canvas. “What we were doing was using a language among ourselves and talking to each other,” John Matos, a graffiti artist known as Crash, told the New York Times in 2012. “Henry [Chalfant] brought an intellectual eye to it, and I guess that was needed. He was able to manifest our language to the public so they could see it differently. He brought a clandestine thing out into the open.”

Whether you choose to believe that graffiti or street art is a valid art form or not, doesn’t stop artists from expressing themselves. Of course, painting graffiti without authorization is considered vandalism, but that doesn’t make it any less artistic. Graffiti offers an uncensored message that other forms of art can’t always portray. And art as a whole is never really defined by society, rather the artist themselves.