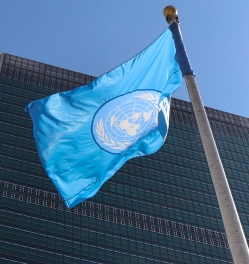 This photo is courtesy of visit.un.org.

The United Nation’s annual summit filled with world leaders opened on September 23rd with U.N. Secretary-General, Antonio Guterres, calling this major summit to promote actions to slow climate change. It’s safe to say the United Nations Summit was not free of tensions as the assembly convenes amid simmering tension in the Middle East over recent attacks on Saudi Arabian oil facilities, which the United States and other nations blame on Iran in which Tehran denies.

The summit officially opened following a climate strike held in Downtown Manhattan’s Foley Square, which totaled “at least 60,000 people” according to Mayor De Blasio’s office who even allowed thousands of students in the New York City Public School system to take the day off in order to participate in the strike. The summit featured a 16-year-old Swedish climate activist Greta Thunberg, who traveled across the Atlantic on a solar-powered yacht in order to make speeches all along the Eastern Seaboard including Capitol Hill. The assembly will draw several world powers including German Chancellor Angela Merkel, French President Emmanuel Macron, and Indian Prime Minister Narendra Modi, who all will detail specific steps to lower dependence on fossil fuel in their respective nations. The leaders of more than 70 countries have made promises outside and inside the U.N. chambers, which sounds “nothing short of revolutionary” as many news-houses call it. By 2050, these leaders say they will reach “net zero” thus, putting no more carbon dioxide into the atmosphere.

While the net-zero buzzwords were as ubiquitous at the United Nations Climate Summit the details of how these nations would reach their ambitious and “revolutionary” goals were elusive, sparking concern from Thunberg and many other speakers and activists. In the Summit, there was little talk of eliminating the use of fossil fuels, an economic and politically painful step that would drastically reduce emissions. The nations that have declared “net zero” targets only make up a small percentage of global emissions. They do not include major polluters with heavy industrial or farming concentrations like China, the United States or India. While the U.S. hasn’t made the pledge as a nation, New York state and California has set its own benchmark. Its net-zero plan, are among the most ambitious on the globe which calls for reducing emissions by 85% by the year 2050 and using offsets from restoring forests and wetlands to “soak up” the remaining 15%.